Journalism can help us envision and move towards a world that works for all.

Journalists have a unique role as storytellers, influencing the cultural narrative that weaves society together. Through my work in organizations, I know that when the stories people tell about the organization change, so does the culture.  The same holds true on the scale of a society. 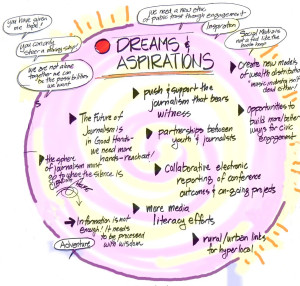 Possibility-oriented stories generate new options. Research on the relationship between positive image and positive action by David Cooperrider, Case Western Reserve University professor of Social Entrepreneurship shows that we create what we can imagine.  Uncovering possibilities feeds our imagination, which is key to journalism that informs and also engages, inspires, and activates.

Though much of our current narrative is filled with stories that increase polarization, journalism educators and professional journalists are re-thinking dualistic — us versus them — models of storytelling.  Even investigative journalism, with its gotcha reputation, is increasingly including solutions.  InvestigateWest, a nonprofit investigative news organization born when the Seattle Post-Intelligencer closed, includes solutions as part of its approach.  Their groundbreaking story on the hazards of chemotherapy exposure for health care workers resulted in passing two laws improving worker safety in Washington state.  According to Rita Hibbard, executive director at the time, what made the difference were the possible solutions in the story.

This story demonstrates that even when the situation seems dire, other storylines are possible. In fact, conflict and struggle placed in a larger context become challenges to overcome rather than reasons to despair. They spark creativity and innovation.

Possibility-oriented storytelling brings journalism into the heart of community life, and supports a vibrant democracy. J-Lab executive director, Jan Schaffer, highlighted several examples in a Nieman Journalism Lab article.  Journalism That Matters gave the idea a practical twist by building on the traditional journalistic questions of who, what, when, where, why, and how, suggesting a sixth “w”: What’s possible now?

News organizations have emerged that are committed to a possibility-oriented perspective.  YES! Magazine has been at it since 1996.  Axiom News is of a similar age.  Both are growing. What’s Good 206 involves youth in telling stories of compassion and success.  David Bornstein’s weekly Fixes column in the New York Times explores solutions to major social problems.  And Bornstein’s newly formed Solutions Journalism Network is committed to rigorous and compelling reporting about responses to social problems.

I offer a few pointers gathered from those who have been at it for a while:

Possibility-oriented storytelling feeds a cultural narrative that helps us to navigate uncertainty by focusing attention on creative ways forward.  Another critical complement for equipping us to be free and self-governing rests in engaging the diversity of people who care about an issue. The next post sheds some light on engagement.

Email was still the primary vehicle of choice for responding, though Facebook also brought some comments.  Jane Stevens, Founder, editor of ACEsTooHigh.com, offered the example of WellCommons, Lawrence Journal-World’s local social journalism health site.  I’ll be saying more about the award-winning WellCommons in the next post in this series.  So stay tuned!

Given the pace of change today, we need journalism that helps us to navigate through uncertainty.

If the purpose of journalism is to support us in making sense of our world, providing the news and information we need to be free and self-governing, what does that tell us about stories that help us find our way in times of change? It calls for an expanded purpose: journalism that not only informs, but also engages, inspires, and activates us to be free and self-governing. 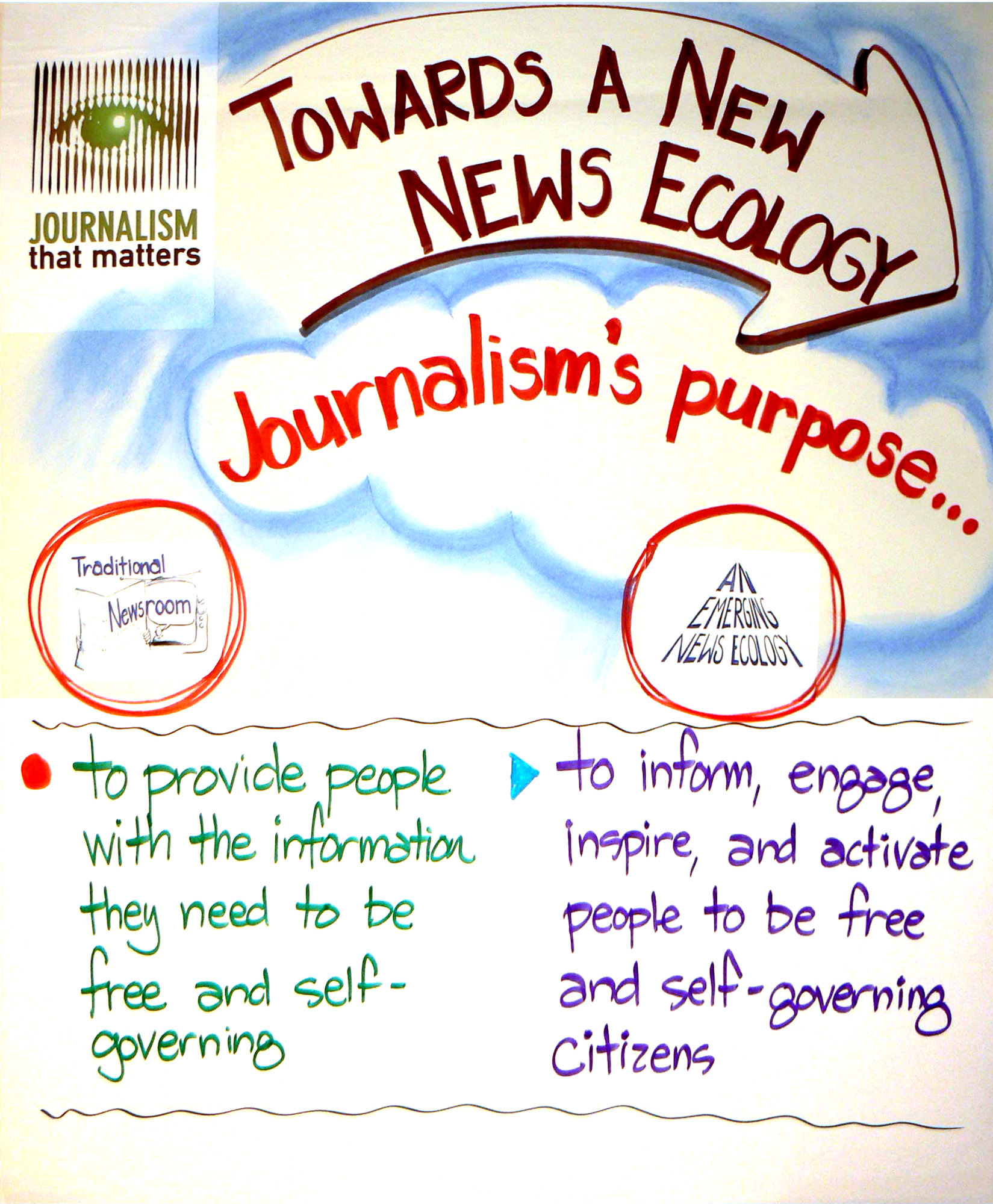 My perspective comes from thirteen years of working with journalists through Journalism That Matters.  It is also influenced by consulting to organizations facing upheaval and as an author of two books on system change. I have seen that the stories we tell matter. They shape our actions.

As cultural storytellers, journalists influence our collective story.  In his groundbreaking work, The Image of the Future, social scientist Fred Polak tells us that cultures without a positive image of their future die within a generation.  Think about that.  Our future depends on positive images.  So cultural narratives – the stories we collectively tell ourselves – are more critical than most of us realize.

Likely unconsciously, most traditional media have approached their mission by telling stories that tend to keep our institutions stable.  They treat the functioning of our educational systems, political systems, healthcare systems, governance systems and other basic systems of society as a given.

When our institutions cease to serve us well, it shows up in the complexity of the issues we face and conflicts over how best to handle them. At such times, journalism that helps us to navigate through uncertainty can inspire and equip us — the public — to engage with complex challenges, taking charge of the well being of our communities and our democracies.

Such a focus raises some essential questions, like: Who decides what is newsworthy? And how?  And even: who decides whether our systems are meeting the needs of the people they are intended to serve?

In that light, consider how much journalistic storytelling uses conflict to make a story compelling. Even if it makes a good story, for many of us, it creates a sense of hopelessness.  Think about how differently you respond to a story about our education system failing and one about education innovations that are making a difference. One story leaves most of us in despair, believing there’s nothing we can do. The other can spark action, motivating us to get involved.

Inspiring and engaging stories don’t need to ignore conflict. They succeed by contextualizing them via big picture aspirations that provide positive images that inspire action.

Over the next few weeks, I’ll elaborate on these ideas in posts on an expanded purpose of journalism, and three principles: possibility, engagement, and diversity. The series ends with some suggestions on what you can do to support a re-vitalized, economically viable journalism that meets the needs of communities and democracies. As a companion piece, I’ll offer a draft functional map of the news and information ecosystem.

A story? A question? A resource? In the spirit of JTM’s aspiration to be a go-to place for connecting people involved with the emerging news and information ecosystem, I invite you to join in. You can: