What does a re-vitalized, economically viable journalism that meets the needs of communities and democracies look like?

Imagine a news organization that invites the public to become sources to “add context, depth, humanity, and relevance” to news stories.”  That’s what American Public media is doing through its Public Insight Network.  In Cleveland, Rita Andolsen left her news director job at WKYC-TV to become the station’s director of advocacy and community initiatives.  Now she hosts community conversations and looks for issues where this commercial station can ethically advocate on behalf of the community to improve the city and its neighborhoods. Or what about publishing a series making visible the widening economic and social gap between minorities and whites in the state and then convening statewide conversations to do something about it?  Laura Frank, executive director of the I-News Network in Colorado, led the way through “Losing Ground.”  (Crockett, 2013).

These examples of involving the public before, during, and after stories are published demonstrate an expanded purpose for journalism.  Not just informing, they also engage, inspire, and activate the public to create solutions. They help to recast attitudes of frustration, anger, and despair by calling forth resilience, curiosity and determination.  Journalism becomes a system that involves journalists and the public in shifting cultural narratives about what’s possible.

Drawn below as a framework for thinking holistically about journalism, telling the story is part of a system of interactions that help us to navigate through uncertainty.  This model emerged from a conversation that I had with Tom Atlee, founder of the Co-Intelligence Institute when he attended JTM’s 2008 New Pamphleteers conference in Minneapolis. 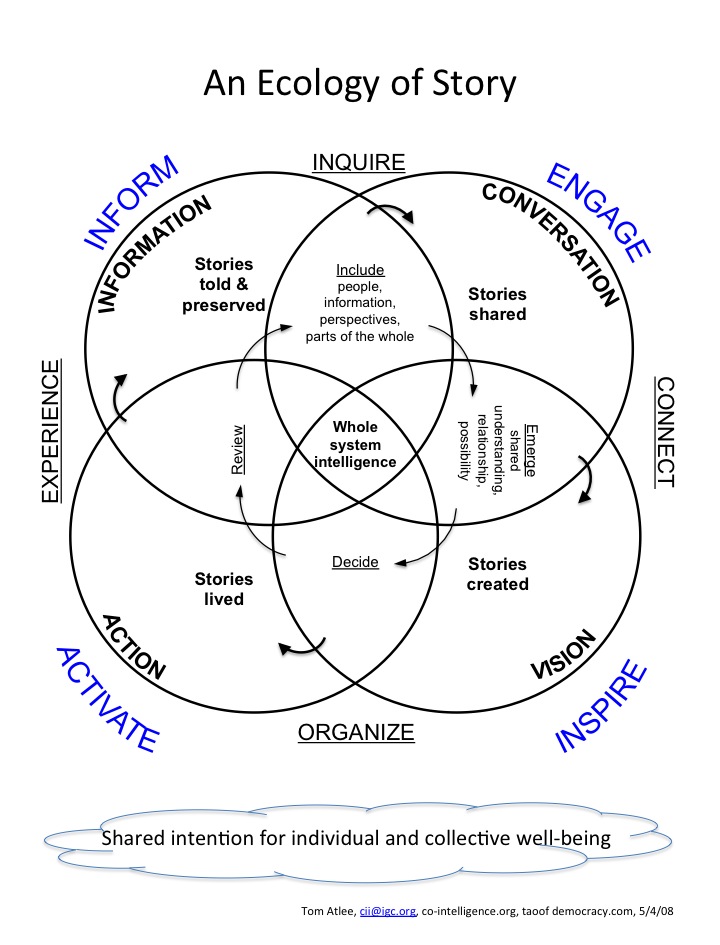 A System of Purposes for Journalism, Tom Atlee

I spoke with Mike Fancher, retired executive editor of the Seattle Times, asking how such a model might have influenced the way the Times did its work.  He began by saying that the newspaper did all of these functions to some extent.  What excited him about this framework was that it treated journalism as a system.

He mentioned a story of a state crime lab that documented cases of innocent people going to jail and guilty ones going free because of system problems at the lab.  It was an important story that did its job of informing the public.  Yet nothing happened.  Mike reflected that traditionally, journalists don’t feel any obligation to help make something happen.

“With a more holistic approach, we probably would have built in elements that were move effective at motivating, mobilizing, inspiring and activating.”

This type of journalism could provide the public with the agency to work together to ask more complex questions about our prevailing cultural narratives such as: Who decides whether our systems – education, health care, governance — meet our needs? What do such systems look like? How do we create them?

Our society faces a dynamic tension.  An old media system that we understood, whether satisfied with it or not, is declining.  A new ecosystem filled with experiments and unanswered questions about how it operates and who and what to pay attention to, is emerging. Journalism organizations that work holistically with their communities are building authenticity and trust, moving beyond serving consumers to creating people and communities in action.

Such a journalism ecosystem requires changes in mindsets, skills, and activities.  Based on my work in organizational systems, I offer three keys in cultivating such a system: possibility-oriented storytelling, engaged constituencies, and diversity, in voices, forms, and funding. I’ll explore one of these each week over the next three weeks.

A story?  A question?  A resource? A comment? In the spirit of JTM’s aspiration to be a go-to place for connecting people involved with the emerging news and information ecosystem, join in. You can:

Also, several of you asked if it was okay to share these posts.  Please do spread the word!

Most respondants emailed me.  Some replied via Facebook, LinkedIn, or Google+.  Responses came from the U.S., the Netherlands, Korea, Brazil, Jordan, and Israel. Tom Atlee was inspired to post an article: Journalism to Energize Citizen Deliberative Democracy.  An Israeli journalist offered a story that I hope to share soon.  Wout-Jan Koridon suggested The Intelligent Optimist (formerly ODE Magazine) as an example.  My favorite comment came from Detroit-based information architect and Journalism That Matters alumni Mary Ann Chick Whiteside, who said: “Interesting idea to put hope as a benchmark of good journalism.” More of what you offered can be found here.

8 thoughts on “An Expanded Purpose for Journalism”