The Women’s Online News Franchise blog is up and running at http://michelleferrier.wordpress.com …but it is so much more. More broadly the blog is called “Digital Content Architects” and examines all kinds of interesting things I find along this journey toward the news franchise concept.

My most recent posts: “The Wonderful CMS of Oz: Off to find some wizards” points to the qualities of a good online community CMS (not news CMS, but one with real community functions). And in “What you ‘do’ comes before what you call it,” I look at the quandary of searching for a domain name before you know what you want to do on a site.

I’ll specifically be chronicling the franchise journey under the category “Franchise” with WCNF as the tag. So look for those specifically if you’re interested in the project.

Of course, like many of you, if I wait around for that wizard I may never get started on my journey down this yellow brick road. So you can virtually watch me tear my hair out as I come to terms with flying monkeys, poppies and COMPROMISES!

With news organizations beginning to create special positions to manage the use of social media tools, such as the recently appointedsocial editor at The New York Times, journalism schools are starting to recognize the need to integrate social media into their curricula. That doesn’t mean having a class on Facebook () or Twitter (), which many college students already know inside and out, but instead means that professors are delving into how these tools can be applied to enrich the craft of reporting and producing the news and ultimately telling the story in the best possible way.

And though many professors are still experimenting and learning how these tools can be used, below are the 10 ways journalism schools are currently teaching students to use social media. Please share in the comments others that you have found to be important and effective as well.

From the PBS Engage Site

We need your input

In today’s media environment – with so many newspapers cutting back on editorial staff, and online media becoming more ever-present each day – do you have the information you need to accomplish your personal goals and to be an effective citizen?

The Knight Commission on the Information Needs of Communities in a Democracy and PBS Engage have teamed up to explore the issues around each citizen’s information needs, and we would like to hear from you. See the Commission’s draft introduction to its report and please share your answers to our questions below.

Some interesting observations from Joel Kramer at MinnPost and the Nieman Labs.

[As we mentioned earlier, the next issue of Nieman Reports is almost ready to be unveiled. On Monday, we gave you a sneak peak at one of its articles, by St. Louis Beacon editor Margaret Wolf Freivogel. 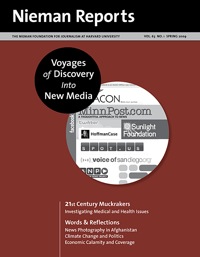 We’ve got one more story to share before the rest of the issue goes online at Nieman Reports’ web site. This one comes from one of the brightest stars in the news-startup firmament: Joel Kramer, former editor and publisher of the Star Tribune in Minneapolis, and now founder of MinnPost. Here, Joel reflects on what he’s learned in MinnPost’s first year-plus. —Ed.]

A lot of pixels are being spilled these days reflecting on the future of newspapers, news, journalists, and journalism. I spent my career in newspapers, first as a journalist and later as a publisher, and I left when the business was financially near its peak. With the for-profit model now shriveling, I’ve spent the past 16 months trying to build one example of what might be coming next—a not-for-profit enterprise providing high-quality regional journalism on the web.

Here are some reflections from that battlefield.

MinnPost is a certain kind of nonprofit journalism enterprise — one that aims to eventually break even on operating revenues, such as advertising, sponsorship, membership and perhaps other sources such as syndication.

This is different from a pure philanthropic endeavor, like ProPublica, which (at least in its current plan) depends for its success on the continuing generosity of foundations or very large individual donors.

Media Discussion from Drupalcon Washington 2009 – a group discussion with representatives from The Observer, McClatchy, and Mother Jones, all of whom have their web properties in Drupal – a discussion of the challenges and strengths. Video below the fold.