Jackie Hai, KJZZ Phoenix Digital Media Editor and Journalism That Matters director, shared a pitch deck she created to make the case for engagement in newsrooms. You are welcome to download a PowerPoint version to modify and use under a Creative Commons license. Both versions have annotations explaining each slide — in the presenter notes in the PowerPoint and on a comment layer in the top left corner of the PDF.

The presentation gives an overview of what engagement means and provides examples of different types of engagement along with case studies from the field. It ends with a mini World Cafe for the group, to give your own organizations a preview of what an engagement experience can be like.

It’s time for a new compact between Journalists and the Public.

We need you.  Your work is vital to the well-being of us all.  I can’t imagine a functional democracy without the passionate commitment journalists make to digging deeply into what matters.  It is a sacred trust and I thank you for doing it on our behalf.

If I – and others –believe that, why do so many of us seem hostile to the press?  Because we feel betrayed.  Where were you when we needed you?  Where were your warnings about the state of the economy?  About the lies of weapons of mass destruction?  About the many stories closer to home that affect our lives and well-being?  Did you miss the clues yourself? Did you know and not help us hear your messages?  How could you let us down?

If you don’t feel trusted, please understand that it is in part the corporation behind you that many of us don’t trust.  When my primary identity shifted from citizen to consumer something died.  You are not your corporation.  I don’t need them.  I need you.

END_OF_DOCUMENT_TOKEN_TO_BE_REPLACED

What is a news and information ecosystem?

The information exchange among the public, government and institutions that can inform, inspire, engage, and activate.

What do we know about it?

There is a new story of journalism being born even as the old story is dying.  At its heart, that new story stays true – and enlarges on – a purpose that many journalists hold dear: “to provide people with the information they need to be free and self-governing" (Kovach and Rosenstiel, 2001).   Like its predecessor, the new story has a mythic quality regarding the role journalism plays in navigating a changing world, bringing people a cultural narrative that prepares them and their communities to prosper.

Each Journalism That Matters Event has added to our understanding of what is emerging.  Those themes are below.

From Detroit:  Communities are taking responsibility for their own story.  One strategy: embed journalists in the communities.

From St. Pete: Journalism is still about the public good and now it is entrepreneurial.

The future of journalism centers around the power of storytelling to create healthy communities. Specifically:

Cultivating “healthy journalists”, renewing the inner life of the journalist;

Preparing the next generation, with an eye towards the emerging citizen journalist; and

Inventing a new economic model. As one participant put it, “Rather than further compromise the work, it’s time to separate journalism from its current funding sources and find a new model.”

Some of its seeds include: END_OF_DOCUMENT_TOKEN_TO_BE_REPLACED

Center for Citizen Media
A new initiative aimed at helping to enable and encourage grassroots media, especially citizen journalism, at every level.
http://citmedia.org/

J-Lab helps journalists and citizens use digital technologies to develop new ways for people to participate in public life with projects on innovations in journalism, citizen media, interactive news stories, entrepreneurship, training and research and publications.

“Welcome to JStartup news, a place for news people to discuss, rate, and share news and commentary about journalism startups, new business models for news, hacker journalism and anything else that falls along these lines.”

Knight Commission on the Information Needs of Communities in a Democracy, http://www.knightcomm.org/

Connecting people who have solutions for community journalism in the digital world.

“News Online is an online group for professionals in “online news” around the world. It carries on in the spirit of former “online-news” e-mail list now with additional web/digest options. With more than 230 people join in its first month”

Placeblogger is a site where you can search for local sources of news, information, and community near where you live, work and travel.

We Media
We Media is a web site, a community, a conference and a global movement to make the world better through media.
http://www.wemedia.com/

Wired Journalists
You’re a journalist who wants to build your skills, serve your community, and advance your career. We’re here to help.

Created originally for Newstools 2008 in Silicon Valley, we re-made the value network maps for Journalism in the New News Ecology at the Poynter Institute.  Here are the new images, along with the original text.

For 150 years the editors of American newspapers ruled the media landscape.
The men at the helm of newsrooms, and most editors are male, set agendas.
They directed massive staffs of journalists whose work poured through an assembly line of cultivating sources, writing, editing, production, printing and delivery.
They operated as esteemed members of The Fourth Estate, imagining themselves as independent counterbalances to the forces of power.
The work of reporters, photographers, and editors became more than a craft. It grew to be a profession, with professional wages, benefits and perks.
The public’s appetite and loyalty to their work was immense.
Huge consumer audiences built around the newspapers at the first half of the 20th century. The newspapers pronounced, and the masses listened.
Later, as audiences shifted to television, which broadcast one way, and every household in America tuned in.
Through it all, the words, photos and editorial judgments of the newspaper and television newsrooms, editors, and reporters continued to set local and national agendas.
And it was a hugely profitable business model. Major department stores, auto dealers, and job-seekers aggregated around the news pages and the news content.
Profits for both commercial television stations and monopolistic newspapers rose to 30% or more as massiveadvertising dollars poured in a mass medium.
Then the world changed. 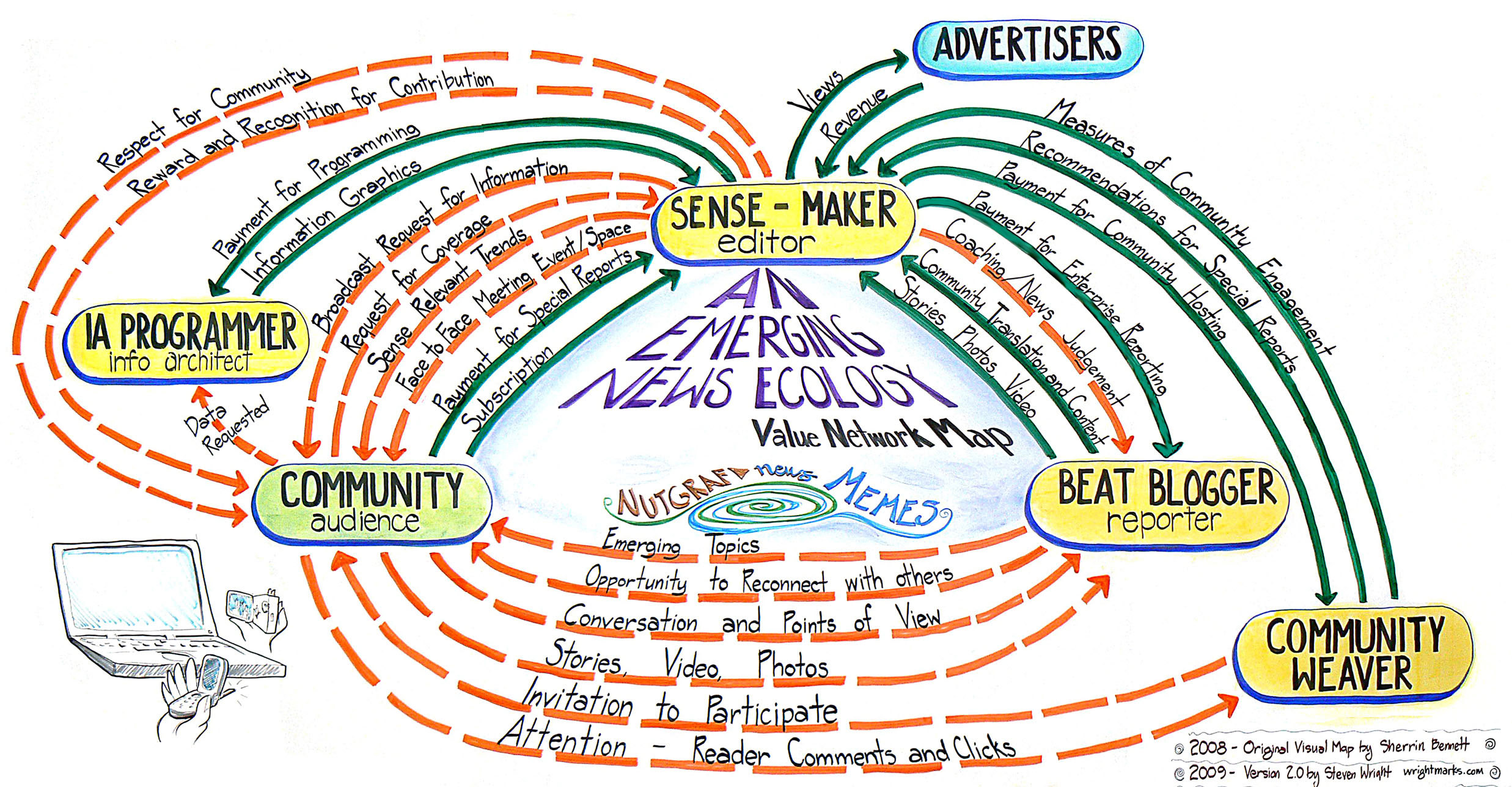 At the beginning of the 21st century, the World Wide Web changed the business and information distribution model for all media.
No longer were printing presses and transmission towers the only means of communication.  A laptop and a broadband hookup did the same work, thank-you.
Journalists for a day, a weekend, or a cause began to supplant journalists at desks, with their pensions and a boss.
The audience formerly known as newspaper readers and television viewers awoke to the freedom of connectivity in a digital age. Virtual communities and international communities of interest transcended geographic communities and the sense of place.
In a flash, media expectations, models and roles all changed.
Media morphed into many-to-many conversations. Content emerged raw and unedited, rather than as carefully parsed verified tidbits produced by trained journalists.
Stories grew on their own, without an editor. Photos were shared without a darkroom.
Bloggers filled content gaps left open or once occupied by paid, professional reporters. User-generated content both encroached on and enriched the media.    Money that once went to news content writers and editors began to flow instead to those who aggregated the news, but did not create it.
Public policy could be shaped by Matt Drudge working in his basement or by a YouTube video captured on a $100 digital camera.
The old media world staggered.

New roles and a new vocabulary have begun emerging.
Some reporters become “beat bloggers” tapping into networks of bloggers to bring complex stories into focus.  “Community weavers” create a sense of community among the former audience and with formal news entities.  “Information architects” make intelligible the vast amounts of data and images now available.  While editorscontinue to be sense makers, connecting facts and making story lines visible, ultimately who filters news from noise, how it happens, and who pays for it is still unfolding.  Even the definition of “news” is up for grabs asmemes — cultural units of information equivalent to genes in the body — replace an event orientation to story.
The new media world has opened the floodgates of opportunity.

Value Network Mapping and Analysis is a tool developed by Verna Allee that displays a holistic picture of a system.  This tool was brought to News Tools 2008 to:

•    give those unfamiliar with the ‘traditional’ newsroom a clear map of how news was produced and value flowed;

•    give those familiar with the “traditional” newsroom an explicit articulation of value flow in that system in contrast to emerging systems of news sourcing and distribution;

•    give everyone a common “language” or “mapping tool” to consider the emerging news ecology and how new roles and value flows can help create a thriving environment.

A simple example is a customer (this is a role) goes to a store and buys groceries from the cashier (role). Money is paid in return for goods – vegetables.  If the customer lives in a small town and has an ongoing patronage relationship with the cashier, there might be an intangible value exchange of information about their families and the neighborhood.

Intangible value: Two primary subcategories are included in intangible value: knowledge and benefits. Intangible knowledge exchanges include strategic information, planning knowledge, process knowledge, technical know-how, collaborative design and policy development; which support the product and service tangible value network. Intangible benefits are also considered favors that can be offered from one person to another. Examples include offering political or emotional support to someone. Another example is a research organization asking someone to volunteer their time and expertise in exchange for the intangible benefit of prestige by affiliation.

Once the roles and value flows are mapped, the picture of the whole system can be used to facilitate relationship management in an ecosystem, consider the business web and ecosystem development, consider options for process re-design, support communities of practice, or consider cost benefits and risks in existing and emerging systems.