How do we know engaging community matters?

Journalism That Matters just released a report on what we’ve learned. A summary is here.

The full report is here. 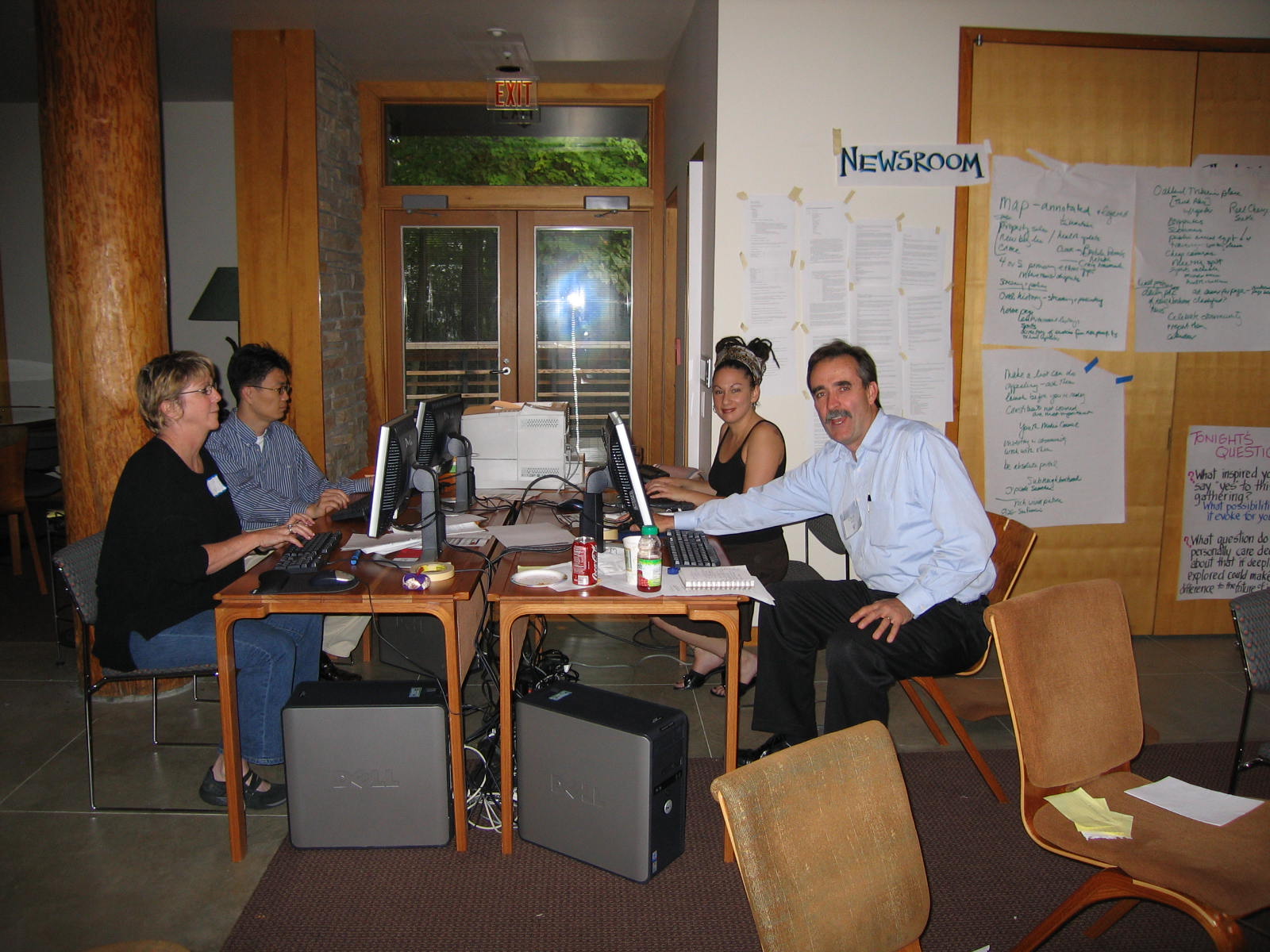 Journalism that Matters for the 21st Century, Kalamazoo 2005 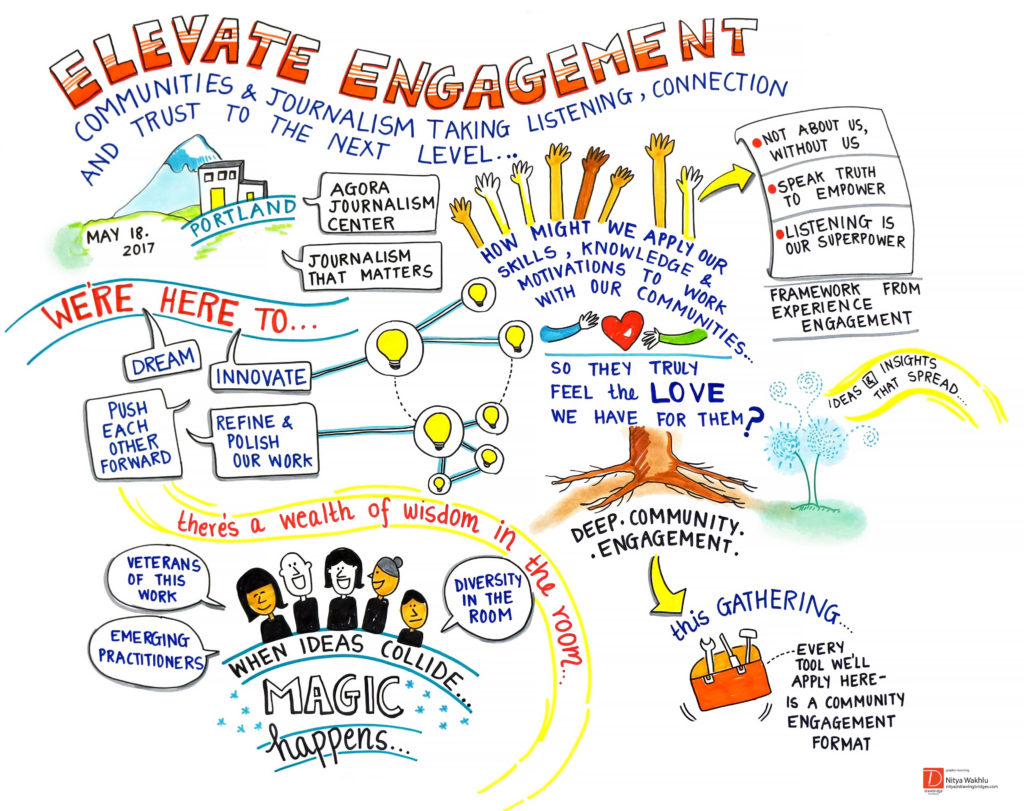 On May 18-21, 2017, a diverse group of 130 journalists, researchers, engagement practitioners, and community leaders gathered at the Agora Journalism Center for Elevate Engagement.

Over a four-day journey, participants explored how engaged journalism can help communities thrive. More specifically, how could we take listening, connection, and trust to the next level?

On the final day, participants identified themes that could support an emerging engaged journalism community of practice to thrive. The result is a proposed foundation for such a community in the form of an Elevate Engagement Manifesto.

Here are other highlights related to the conference:

In May 2015 a group of journalists and funders met around the question: How do we cultivate a vibrant, powerful, and resilient independent journalism ecosystem?

The gathering was inspired by a comment by Bill Moyers about the need for an independent journalism trust fund.  As a result of the Pocantico gathering, while we didn’t have any immediate outcomes related to a trust fund, we did establish more urgently the business necessity of addressing race.  Among the many initiatives we are aware of:

The Media Consortium adopted racial equity as its guiding strategic goal for the next five years. Executive Director Jo Ellen Kaiser reports:  “Our members were enthusiastic in embracing this goal; at our annual conference, 60 individuals from 45 outlets attended an all-day racial equity training led by Race Forward. We are pursuing a racial equity fund; a mentorship program for journalists of color; and collaborative work focused on issues of race.”

A new nonprofit journalism collaborative in Boston. During a recent call, Director Chris Faraone said, “The JTM event I attended at Pocantico, without it, there wouldn’t be a BINJ.” He writes:  “Having known almost nothing about nonprofit journalism before being invited to the retreat, I spent the weeks leading up to the conference studying various models. In the process my partner and I hatched a beta version of the Boston Institute for Nonprofit Journalism, and set out to support independent media makers and small publications.  After surveying the landscape and hanging with the learned gang in Rockefeller country for three days, I was hopeful for the first time since the Boston Phoenix shuttered in 2013. …We are mentoring the next generation of enterprise reporters; more than half of our features in the first year were written by first-time long form writers.   We’re launching new projects and initiatives each month, from the Boston Bubble magazine to an upcoming ethics colloquium. We’re still small and scrappy, no doubt about it. But [we made an] enormous contribution to the public dialogue in Boston this past year—more than a dozen features, nearly 100 columns, several neighborhood events.” [This effort also received funding as a result of Pocantico.] What’s more, the BINJ is pioneering in using the online source Medium to create new income streams: https://medium.com/@Fara1/and-now-a-word-from-the-local-journalism-nonprofit-thats-monetizing-on-medium-ac21cd1804b8#.wh6hnnkoq

And, they are spreading the model to other regions: https://medium.com/binj-reports/how-to-start-a-grassroots-nonprofit-journalism-incubator-from-scratch-af335489cda4#.nmasww41w

Information Trust Exchange. Bill Densmore writes: “I connected at Pocantico for the first time with Knight Foundation’s Jennifer Preston, and with Bill Buzenberg, who inspired me and RJI to push on what has become the Information Trust Exchange Project — http://www.infotrust.org  / Nearly a year and five task group meetings later, the creation of a shared user network that helps with privacy, identity, advertising and information commerce is dramatically closer to a reality.  The urgency of the need underscored by the Pocantico gathering, and the broad support for this big — but doable — network idea, the rise of ad blocking and “creepy” ad-surveillance, have all been part of the mix.”

Awareness of diversity.  Kevin Davis said the most important outcome for him was realizing “the importance of diversity, inclusiveness and ensuring that the people we serve are sitting at our table.”

To that end, Esther Kaplan reports, the Nation Institute launched the Ida B. Wells Fellowship to in March 2016 to promote diversity in journalism by helping to create a pipeline of investigative reporters of color who bring diverse backgrounds, experiences, and interests to their work. http://www.theinvestigativefund.org/about/2219/ida_b._wells_fellowship

Sources as narrators, not subjects. One independent journalist who attended, Julie Schwietert Collazo, explains that the Pocantico discussions have impacted her “in both small and big ways, from introducing constructive criticism into collegial conversations about editorial representation, to being more intentional about being representative with my sources and continuing to push toward a personal model of reporting and storytelling that privileges the sources as narrators and protagonists rather than passive subjects. I’ve also reached out to colleagues to develop and disseminate a list of subject matter experts who identify as Latinos/as, distributing this to colleagues who, in particular, complain that they simply don’t know how to be more representative.”  She also wrote an article on pay for independent journalists: http://alldigitocracy.org/how-can-we-fund-independent-journalism/

Culture shift.  Tracie Powell, founder of All Digitocracy, was a Knight Fellow at Stanford: “I made significant headway in figuring out that adding to audience has almost nothing to do with news organizations’ data collection or technology– both are already at our fingertips. The problem is culture. To that end, I’m hoping to conduct a case study, preferably in Philadelphia– both due to the ecosystem and the region’s demographic diversity.  While on fellowship, I also collaborated a bit on an initiative that offers some transparency on how freelance writers are paid.”

From journalism to community.  Just as the Pocantico participants moved ethnic journalism, audience and community to the center of its map of the ecology of independent journalism, Journalism That Matters found its center of gravity moving from the world of journalism more squarely into community engagement. Five months after Pocantico, JTM co-hosted the Experience Engagement gathering at the University of Oregon’s Agora Center in Portland.  Out of it came three engagement principles which are being tested as JTM refocuses on media deserts, communities of color and underserved communities:  “Nothing about us without us” / “Listening is our superpower”  /  “Speak truth to empower” https://medium.com/experience-engagement/towards-a-civic-communications-ecosystem-for-thriving-community-f4f75c4ca450#.njhaf448c

Moyers & Company. While the Pocantico gathering was originally inspired by Bill Moyers’ idea of creating a trust fund to support independent journalism, Moyers was unable to attend due to family obligations.  One of his longtime producers, Gail Ablow, attended the gathering and is now working with him on http://billmoyers.com . She continues to contribute ideas and perspectives from the Pocantico discussions to Moyers’ podcasts and speeches, including this one at the New York Public Library: http://billmoyers.com/2015/05/27/bill-moyers-speech-challenge-journalism-survive-plutocracy/

Relationship power.   A number of relationships either created or strengthened at Pocantico have resulted in funding, ongoing collaborations, and “keeping each other informed.”  YES! Magazine’s Sarah Van Gelder reports that Bill Buzenberg has been working with them part-time to strengthen sustainability.  Michelle Garcia is cooking up a new project in Texas.  Jay Harris has carried ideas to his new board role at Free Speech TV. Several funders said Pocantico’s opportunity to spend less-formal time with each other, and with other participants, was useful in their work.

It’s time for a new compact between Journalists and the Public.

We need you.  Your work is vital to the well-being of us all.  I can’t imagine a functional democracy without the passionate commitment journalists make to digging deeply into what matters.  It is a sacred trust and I thank you for doing it on our behalf.

If I – and others –believe that, why do so many of us seem hostile to the press?  Because we feel betrayed.  Where were you when we needed you?  Where were your warnings about the state of the economy?  About the lies of weapons of mass destruction?  About the many stories closer to home that affect our lives and well-being?  Did you miss the clues yourself? Did you know and not help us hear your messages?  How could you let us down?

If you don’t feel trusted, please understand that it is in part the corporation behind you that many of us don’t trust.  When my primary identity shifted from citizen to consumer something died.  You are not your corporation.  I don’t need them.  I need you.