My friend and colleague, Tom Atlee, founder of the The Co-Intelligence Institute, developed a map of stories entitled Whole System Learning and Evolution — and the New Journalism
that I think has great potential as a way of thinking about what is
required for both great stories and great story-telling organizations.
In the version below, I changed a few terms (e.g., “community” became
“connect” to create consistency of form) and I added four verbs (in
blue) that, framed as questions, I think could provide a tool for
assessing the likely effectiveness of a story or a news organization.
The questions that Tom’s model sparked for me: 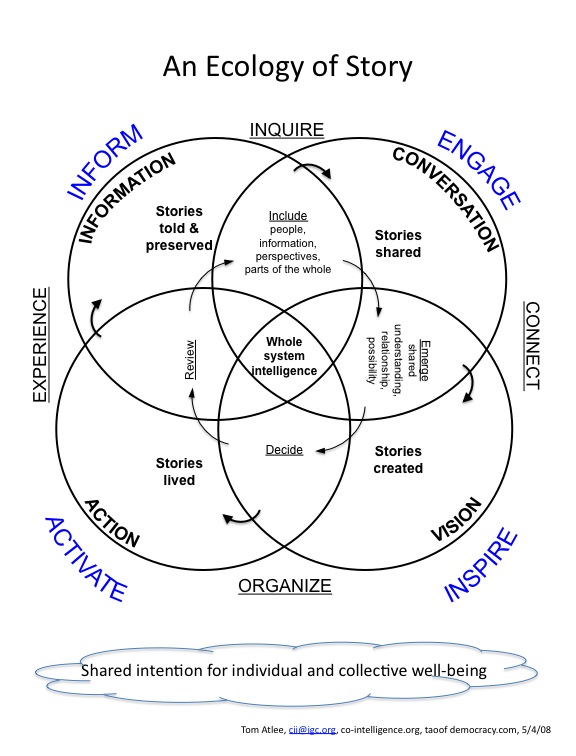 As I read people’s registration comments for NewPamphleteers/New Reporters – the upcoming JtM gathering in Minnesota, it struck me that people were asking questions and bringing expertise in six areas:

Here’s a picture of what seems to be emerging: 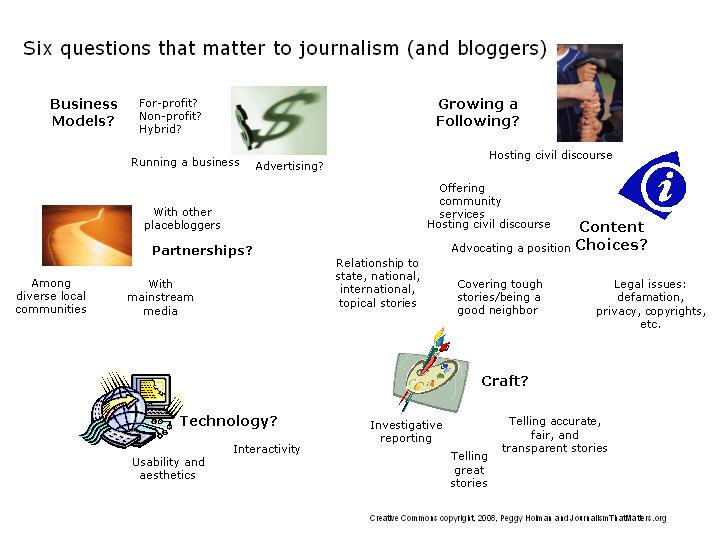 We’ve now got a twitter stream for Journalism that Matters: jtmstream. Join us from June 4-5.

As I reflected on Journalism that Matters-Silicon Valley,
it struck me that my favorite subject – the power of story to inspire
and engage, was a very quiet theme at this particular gathering. It got
me thinking about the need to say something about what is emerging is
this arena.
It began for me with three threads of the Journalism that Matters-Memphis session:

“I had been depressed. A couple of years ago, I resolved
to find hope. When you open yourself to possibility you are willing to
experience stuff you haven’t experienced before.”
What a fabulous discovery: finding hope is a choice. Could Geneva’s comment be indicative of an emerging trend?

“But I know, somehow, that only when it is dark enough, can you see the stars. …”

What a profound insight when so much coverage is about the dark! Why not also look at the stars in the story?

“Given all you’ve experienced, what the best possible outcome you can imagine?”

I was stunned by her powerful and cogent response — that she hoped
Josh’s situation provided clarity about the application of first
amendment rights to emerging types of journalists — because it shifted
the interview’s tone from frustration and defeat to hope and
possibility.

To my surprise, Jessica told us that asking “what’s possible now”
has become central to their style of reporting. Sarah then told us this
story:

The first time I used “what’s possible now” was reporting in little
Pakistan in Brooklyn. I was hearing about the experience of families of
deportations, mostly young men. I was talking to that community and to
the non-Pakistani community who had very different feelings. People
felt strongly on different sides of same issues. I think the first time
I asked “what’s possible now”, may have come out of frustration. It is
hard to have conversations and not get anywhere. I threw my hands up
and said ok, “what is your ideal solution?” And everything changed. (the interview)

Sarah then offered a second story:

We – Jessica and I – were in the Middle East, talking with a
Palestinian about frustrating, polarizing material. He kept repeating
the same ideas over and over so we asked that magic question: “given
what’s happening, what’s possible now?” It shifted the interview
completely, as our contact began envisioning the situation in a
completely new way. (the interview)

The stories we tell ourselves shape the way we see the world. And
that shapes our behavior. A trend towards asking “what’s possible now?”
follows the energy towards our hopes and aspirations. Sounds to me like
a trend worth amplifying!!!

A coda to this story: Josh Wolf attended NewsTools 2008. Here’s a video interview done by David Cohn during NewsTools. In a second interview, by From the Frontline, Josh describes an interesting idea for a live internet news network that harnesses live video broadcasting tools like Qik,Flixwagon and Ustream.tv coupled with the microblogging tool Twitter and Skype call ins.

150 journalists, technologists, educators, and others gathered at Yahoo! this afternoon for the launch of NewsTools2008 – the most current JtM gathering that is focused on innovations for “journalism that matters.”

To provide a common framework for the diverse participants, we
introduced two “value network maps”; one of the old newsroom and the
other of the emerging news ecology, along with a description of Value
Network Mapping and Analysis. Here’s the Mapping Handout; the same text follows. 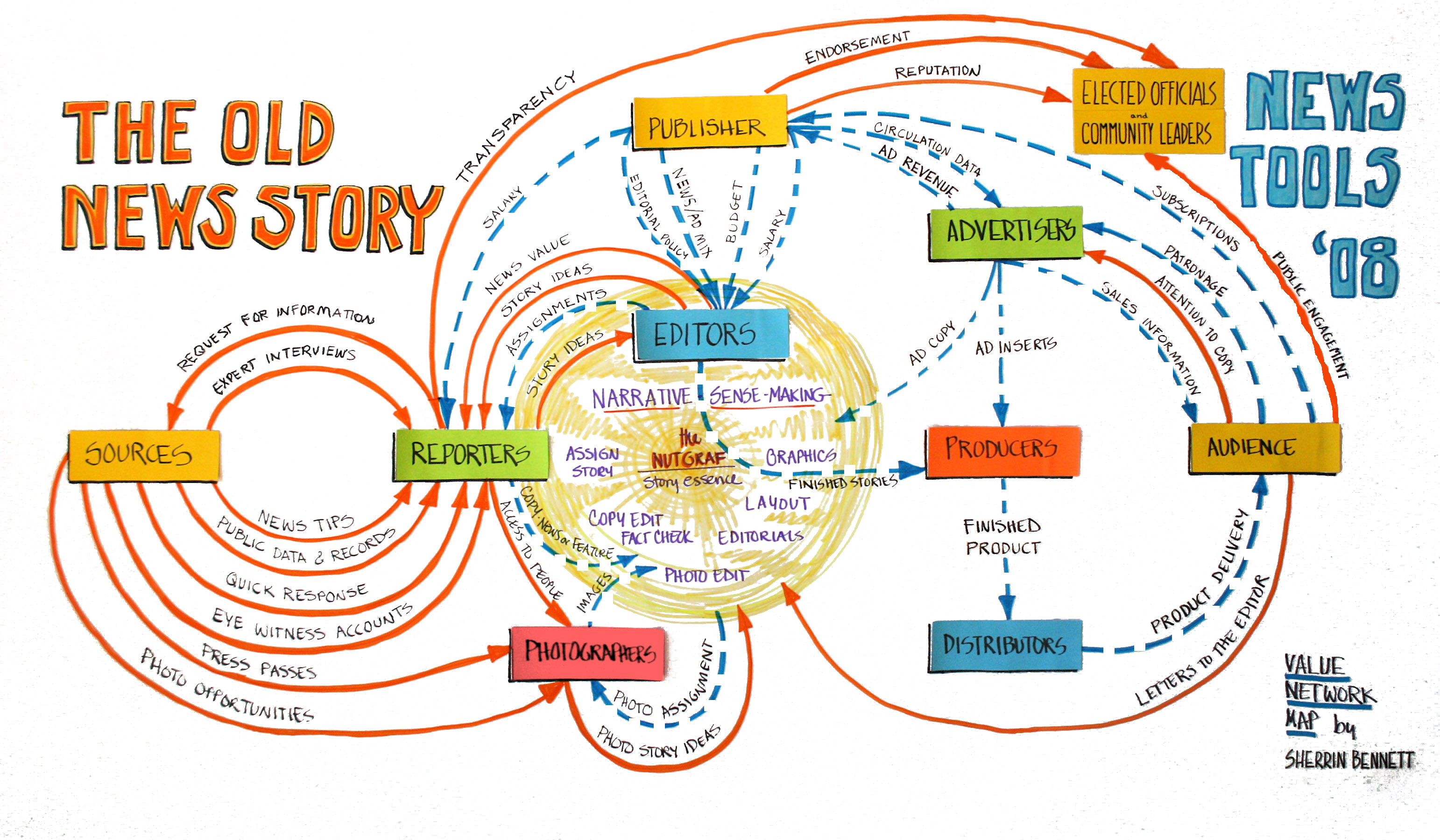 For 150 years the editors of American newspapers ruled the media landscape.

The men at the helm of newsrooms, and most editors are male, set agendas.

They directed massive staffs of journalists whose work poured through an assembly line of cultivating sources, writing, editing, production, printing and delivery.

They operated as
esteemed members of The Fourth Estate, imagining themselves as
independent counterbalances to the forces of power.

The work of reporters, photographers, and editors became more than a craft. It grew to be a profession, with professional wages, benefits and perks.

The public’s appetite and loyalty to their work was immense.

Huge consumer audiences built around the newspapers at the first half of the 20th century. The newspapers pronounced, and the masses listened.

Later, as audiences shifted to television, which broadcast one way, and every household in America tuned in.

Through it all, the
words, photos and editorial judgments of the newspaper and television
newsrooms, editors, and reporters continued to set local and national
agendas.

And it was a hugely
profitable business model. Major department stores, auto dealers, and
job-seekers aggregated around the news pages and the news content.

Profits for both commercial television stations and monopolistic newspapers rose to 30% or more as massive advertising dollars poured in a mass medium.

Then the world changed. 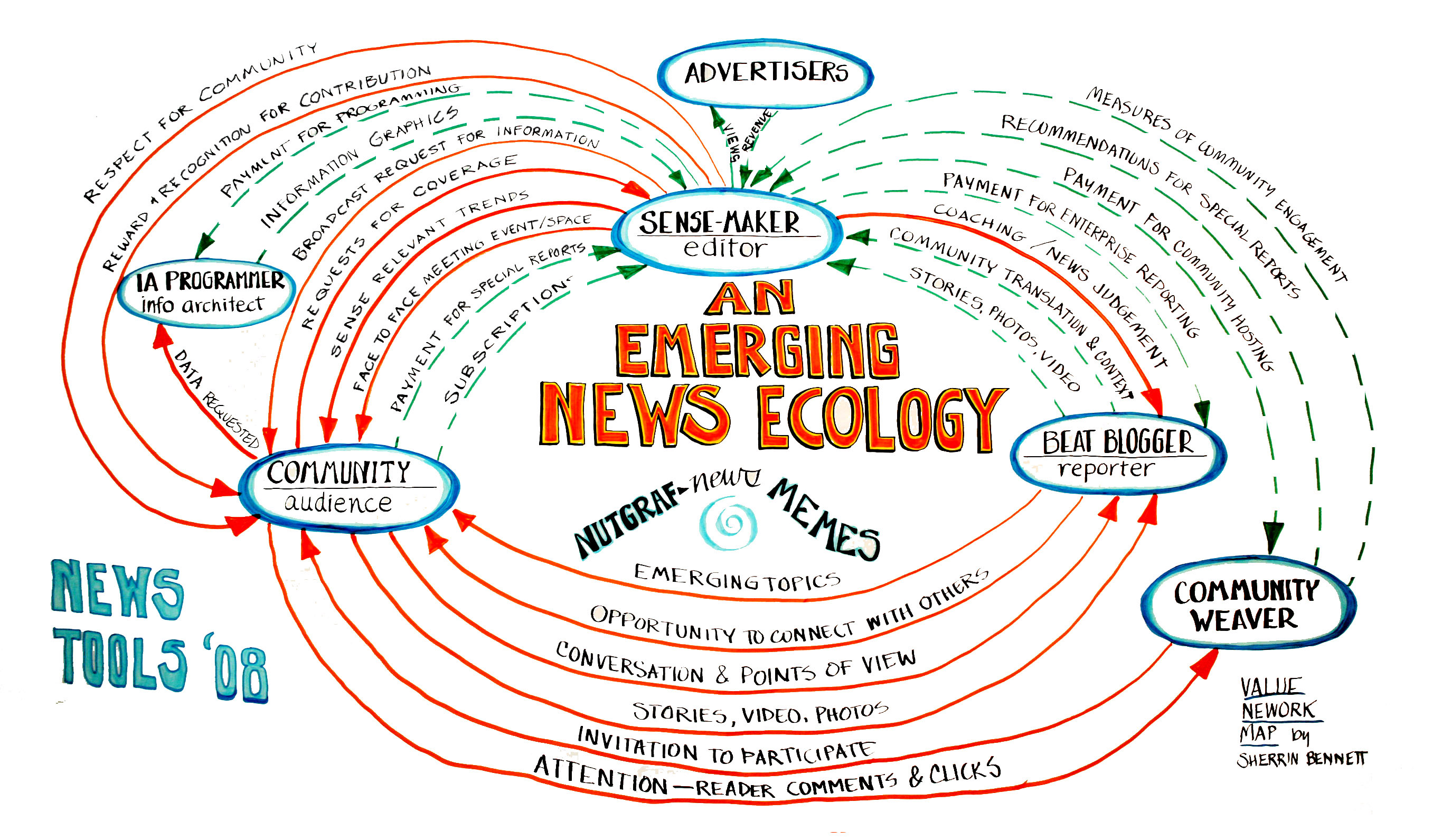 At the beginning of the 21st century, the World Wide Web changed the business and information distribution model for all media.

No longer were printing presses and transmission towers the only means of communication. A laptop and a broadband hookup did the same work, thank-you.

Journalists for a day, a weekend, or a cause began to supplant journalists at desks, with their pensions and a boss.

In a flash, media expectations, models and roles all changed.

Stories grew on their own, without an editor. Photos were shared without a darkroom.

Money
that once went to news content writers and editors began to flow
instead to those who aggregated the news, but did not create it.

Public policy could be shaped by Matt Drudge working in his basement or by a YouTube video captured on a $100 digital camera.

New roles and a new vocabulary have begun emerging.

Some reporters become “beat bloggers” tapping into networks of bloggers to bring complex stories into focus. “Community weavers” create a sense of community among the former audience and with formal news entities. “Information architects” make intelligible the vast amounts of data and images now available. While editors continue to be sense makers,
connecting facts and making story lines visible, ultimately who filters
news from noise, how it happens, and who pays for it is still unfolding. Even the definition of “news” is up for grabs as memes — cultural units of information equivalent to genes in the body — replace an event orientation to story.

The new media world has opened the floodgates of opportunity.

Value Network Mapping and Analysis is a tool
developed by Verna Allee that displays a holistic picture of a system.
This tool was brought to News Tools 2008 to:

· give those unfamiliar with the ‘traditional’ newsroom a clear map of how news was produced and value flowed;

· give
those familiar with the “traditional” newsroom an explicit articulation
of value flow in that system in contrast to emerging systems of news
sourcing and distribution;

· give
everyone a common “language” or “mapping tool” to consider the emerging
news ecology and how new roles and value flows can help create a
thriving environment.

Tangible value: All exchanges of
goods, services or revenue, including all transactions involving
contracts, invoices, return receipt of orders, requests for proposals,
confirmations and payments are considered to be tangible value.
Products or services that generate revenue or are expected as part of a
service are also included in the tangible value flow of goods,
services, and revenue.

A simple example is a customer (this is a role)
goes to a store and buys groceries from the cashier (role). Money is
paid in return for goods – vegetables. If the customer lives in a small
town and has an ongoing patronage relationship with the cashier, there
might be an intangible value exchange of information about their
families and the neighborhood.

Intangible value: Two primary
subcategories are included in intangible value: knowledge and benefits.
Intangible knowledge exchanges include strategic information, planning
knowledge, process knowledge, technical know-how, collaborative design
and policy development; which support the product and service tangible
value network. Intangible benefits are also considered favors that can
be offered from one person to another. Examples include offering
political or emotional support to someone. Another example is a
research organization asking someone to volunteer their time and
expertise in exchange for the intangible benefit of prestige by
affiliation.

Once the roles and value flows are mapped, the
picture of the whole system can be used to facilitate relationship
management in an ecosystem, consider the business web and ecosystem
development, consider options for process re-design, support
communities of practice, or consider cost benefits and risks in
existing and emerging systems.