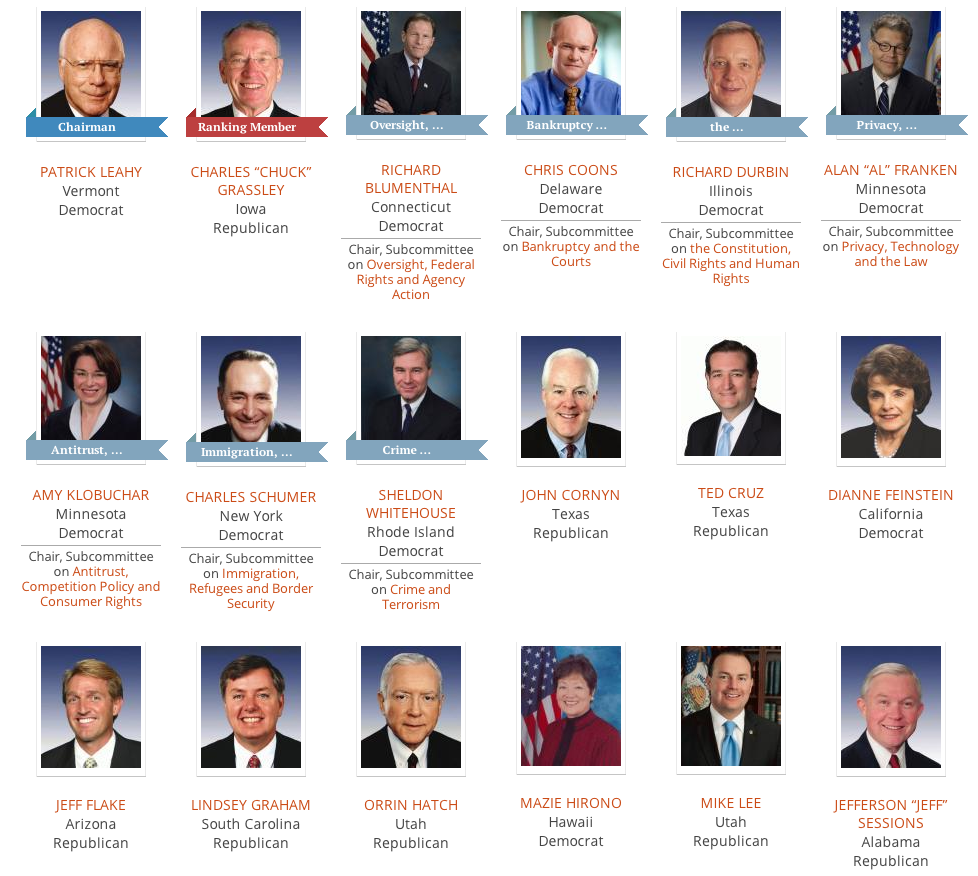 The Senate Judiciary Committee is poised to place a federal shield law before the full Senate, but some senators disagree about who should qualify for its protections.

A shield law establishes a reporter’s privilege against testifying about their sources and unpublished materials. Nearly every state in the country has some sort of shield protections, but there is no federal shield law and very limited protections for journalists in federal court.

On May 16, Sen. Charles Schumer (D-NY) introduced The Free Flow of Information Act of 2013. The bill is very similar to the previous failed attempts to establish a federal reporter’s privilege, but unlike the Free Flow of Information Acts of 2007, or 2009, or 2011, this time the bill would protect journalism by the people as well as that of the mainstream media. Schumer’s bill covers anyone “with the primary intent to investigate events and procure material in order to disseminate to the public news or information concerning local, national, or international events or other matters of public interest, regularly gathers, prepares, collects, photographs, records, writes, edits, reports, or publishes on such matters.”

With more and more stories being generated by freelance reporters and concerned citizens, Schumer’s bill recognizes that if it is to protect the changing news ecology it must be inclusive of those engaging in journalism whether they are working on salary, freelancing, or self-publishing on the Web.

But during a Senate Judiciary Meeting earlier this month, three senators on the committee proposed revisions that would radically change when the law would apply.

On Sept. 12, the Judiciary Committee will consider 37 amendments to the Free Flow of Information Act, 27 of which were introduced by Sen. Jeff Sessions (R-AL). Sen. John Cornyn (R-TX) introduced eight amendments, and Sen. Dianne Feinstein (D-CA) introduced two. All three senators seek to change who would be covered under the law.

Feinstein seeks to not only narrow the definition of who would qualify for protection, but to explicitly define those people as journalists — Schumer’s bill uses the term “covered person.” Under Feinstein’s amendment, a “journalist” is “a person who is, or on the relevant date, was, a salaried employee, independent contractor, or agent of an entity that disseminates news or information by means of…”

In other words, unless you are on salary, you’re not doing journalism until you have a contract in hand.

In the same proposed amendment, Feinstein goes on to also define a journalist as a:

(i) a person who — at the inception of the process of gathering the news or information sought, had the primary intent to investigate issues or events and procure material in order to disseminate to the public news or information concerning local, national, or international events or other matters of public interest, and regularly conducted interviews, reviewed documents, captured images of events, or directly observed events;

(ii) obtained the news or information sought in order to disseminate it by means of an entity set out in subparagraph (A)(i) of this section; and

(iii) either—
(I) would have been included in the definition in subparagraph (A) of this section for any continuous three-month period within the two years prior to the relevant date;
(II) had substantially contributed, as an author, editor, photographer, or producer, to a significant number of articles, stories, programs, or publications by an entity set out in subparagraph (A)(i) of this section within two years prior to the relevant
date; or
(III) was a student participating in a journalistic publication at an institution of higher education (as defined in section 102 of the Higher Education Act of 1965 (20 U.S.C. 6 1002)) on the relevant date;

If I’m parsing this language correctly, even if you meet the first requirement, you still don’t qualify unless you would have met that criterion for a continuous three-month period at some point over the last two years, otherwise you’re not a journalist — legally speaking at least.

In a recent interview with Amazon, President Barack Obama acknowledged that the nature of all occupations, including journalism, has changed.

“We have increasingly resigned ourselves to a ‘winner-take-all’ economy — again, driven a lot by technology and globalization, where folks at the very top are doing very well and the broad middle class of people, people trying to get into the middle class, are having a tougher and tougher time,” said President Obama. “It used to be there were local newspapers everywhere. If you wanted to be a journalist, you could really make a good living working for your hometown paper. Now you have a few newspapers that make a profit because they’re national brands, and journalists are having to scramble to piece together a living, in some cases as freelancers and without the same benefits that they had in a regular job for a paper.”

It is encouraging to see that Feinstein’s proposed amendment includes student journalists within its protections. Last year I spoke at the Berlin Freedom of Expression hosted by the Institute for Cultural Diplomacy on why protections for the press should include student journalists and independent reporters. It’s nice to see some of the issues I raised resonating, but such a complex equation to determine who should be covered does nothing to insure that the journalists protected are the responsible ones.

Sen. Sessions more than two dozen amendments would drastically reduce the scope of the shield law. Not only would Sessions version of the bill no longer require the courts to exhaust all alternative sources for information before subpoenaing a journalist, his version would also exclude the reporter’s privilege in cases involving classified information, grand jury leaks, crimes involving violence and several other scenarios. Although his version of the shield law might still protect journalists in cases involving civil suits between private parties, the scope of its protections would be otherwise quite limited. It would not have covered any of the recent cases where journalists were facing contempt citations in federal court.

Most of Sen. Cornyn’s amendments involve minor language changes, but one of his amendments would exclude journalists from invoking the reporter’s privilege to protect the identity of a government official who has released personal information about a private citizen. Another of Cornyn’s amendments would rely on the court’s interpretation of the First Amendment alone to determine who would and would not qualify for its protections.

The state shield law has successfully protected both traditional reporters as well as bloggers against contempt. In 2006, the California Courts of Appeal found that the publisher of Think Secret, a now-defunct Apple rumors site, qualified for protections as a journalist under the California Shield Law. Since Apple chose not to appeal that ruling to the state supreme court, it is now a commonly held belief that bloggers and other citizen journalists can successfully invoke the state shield law in California.

Every state’s laws will approach the issue of who is covered differently, but The Reporter’s Committee for Freedom of the Press has compiled detailed information about the status of the privilege in all 50 states. Only a few states have established whether unpaid contributors and self-publishing bloggers are protected through case law, and even fewer address the issue legislatively.

When the Senate Judiciary Committee introduces a shield law to the full senate following next months meeting, that law — if successfully passed — will likely serve as a guide point to the state courts and legislators as to how their own shield laws should be interpreted or amended.

We do not yet know what the future of journalism will look like or who will be its practitioners. But we do know that more and more journalism is being produced by people who would qualify for protections under the language that Sen. Schumer has proposed.

But some of these journalists would not maintain that protection if the language Feinstein has proposed is adopted, and if Sen. Sessions gets his way the bill would be a shield law in name only.

A robust and inclusive federal shield law is on the horizon, but the decision to keep it that way will come down to the 18 people on the Senate Judiciary Committee. Starting Monday, I plan to call the offices of all 18 senators. I encourage you to do the same.

Disclosure: I spent 226 days in a federal prison for refusing to comply with a grand jury subpoena relating to my work as a journalist. If Sen. Schumer’s bill had been law at the time, it is likely I would not have been found in contempt of court.