Vociferous comments are the hallmark of a modern news Web site, and The San Francisco Bay Guardian is no exception. But for one week the newspaper has shut down their anonymous online battleground.

Instead, readers were invited to attend a community meeting that the Guardian hosted on Wednesday, which I reported on for a companion piece to this column. The newspaper has also directed its readers to Tweet at them or to comment on its Facebook page “where it’s tougher to troll anonymously,” said Editor Steve Jones in a Guardian blog post.

Anonymous comments have been a problem for almost every newspaper, but the issue is magnified at the Guardian, a 47-year old institution that was sold by its founder last year. Long-time editor Tim Redmond was pushed out in June, and the city itself is under a tumultuous change that some say dwarfs the transformation the city experienced during the last dot-com boom.

Some online publications have chosen to rely on Facebook to handle their comments, but such a move would surely trigger a backlash from some Guardian readers. At Wednesday’s meeting one woman criticized the Bay Guardian for sending people to Facebook to RSVP for the meeting, and Jones said that the company has significant privacy concerns that he himself has reported on in the past. The role that Facebook and other Silicon Valley companies have played in driving up housing prices and spurring on massive construction projects while transforming the demographics of the city doesn’t help either. 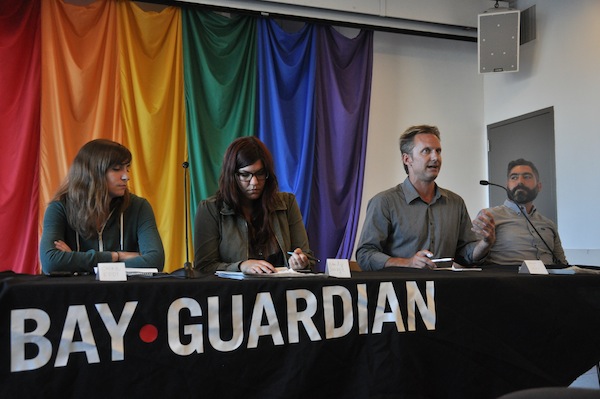 The community forum seems like a great step forward in creating a real conversation with its readers and the people of San Francisco, but the one-off meeting was attended almost exclusively by those who already love and cherish the Guardian. I’d love to see the forum expanded into a monthly event, though I don’t think regular meetings would do anything to bring the newspaper’s critics into the conversation. Free food might do the trick though.

Another substitute that someone suggested at the meeting was to increase the number of letters published in each edition of the paper. Jones seemed enthusiastic about the idea and had previously posted a call for letters on the Guardian’s blog. But letters to the editor are closer to public comment at a government meeting than they are to real conversation. Typically the editor rarely prints a reply to the comment, and I’ve never heard of a newspaper publishing a reader’s response to a response.

While there are plenty of reasons why anonymity is crucial to journalism, it’s unclear why it’s necessary for online commenters to be anonymous, at least in the U.S. The first commenting systems were not anonymous because it was better. They were anonymous because it was much easier to avoid building the tools that would be necessary to verify the identity of a user. Until a few years ago, it wasn’t really feasible to build this sort of online commenting system.

Disqus is one of the most popular 3rd-party commenting platforms, and it allows someone to sign in directly through Disqus or through either their Google, Facebook or Twitter accounts. But the Disqus software also tracks what pages its users are visiting on the Web, and raises just as many privacy concerns as Facebook.

How can the SF Bay Guardian, and other sites, quell trolling commenters without devoting hours to moderating all incoming comments or relying on a 3rd party company that may use the data gathered in an unsavory way?

In the absence of an answer, the Guardian has temporarily unplugged their comments and called on their readers to speak to them directly. When the experiment is over I’ll ask Jones what they’ve learned through this experiment; I plan to share those findings in a future column.

4 thoughts on “A Radical Approach to Comments”