1. It took someone else’s perspective for me to see the value of the work of the Journalism That Matters Create or Die series of design | build | pitch events that were held in 2010 in Detroit and 2011 in Greensboro, NC. These events serve as a firestarter…an opportunity for passionate people to meet talented technicians and ignite innovation in the journalism space.  The passion of the Greensboro 52 or G52 has continued to live on our Facebook Create or Die group, where members share their projects, needs and support. We need to move more of these projects up the pipeline to funding and raise awareness for our successes. And it looks like Create or Die 3 will have an important place in this media entrepreneurship ecosystem. 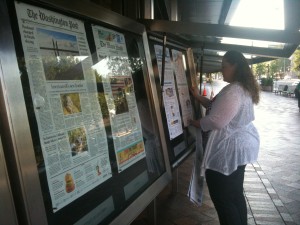 One stop on my East Coast Listening Tour was the Newseum in Washington, DC, where the work of thousands of journalists continues to inspire awe.

2. The second step is to create more venues like Comcast’s DreamIt Ventures, UNITY’s NewU and the NewME accelerator that increase the odds that diverse people and projects can pitch and be heard. As part of this mix, we need incubators that don’t require relocation to Silicon Valley or Boulder, Colorado. A “Bloom where you’re planted” model would bring together training and talent in a geographic space. Journalism That Matters piloted such an idea in Seattle in 2010. The Pacific Northwest Collaboratory was born as a support system for the new news ecology there. That successful experiment should be replicated in other regions.

3. The third step is education and training for the hundreds of potential businesses that wither at the doorways to incubators and pitch sessions. These projects could be successful if provided with nurturing, talent, and access to funds. We need a distributed model, probably online and in physical space, that will help give entrepreneurs just-in-time access to the information and people that can help vet and nurture new ideas.

4. The fourth step is the creation of a talent network so that media entrepreneurs can find and build a talented team that has a higher likelihood of success. Content ideas rarely get funded unless they have a strong technology play. Many ideas flounder because of the lack of a tech team early on in the process of product development.

5. The fifth step is to create a microfund to support application fees and travel fees for potential entrepreneurs to attend and perhaps pitch at the other startup weekends and venues around the country. These small loans, probably of a couple of hundred dollars, will help in identifying media entrepreneurs in need of just the services a robust network can provide (see bullet three and four).

I’d love to hear what others think is needed to make the whole ecosystem a tight, resilient, effective network. I’m still listening.

Dr. Michelle Ferrier is chief instigator of the JTM Create or Die series. She is also an associate professor in the School of Communications at Elon University, where she maintains a wiki on new media innovators of color. 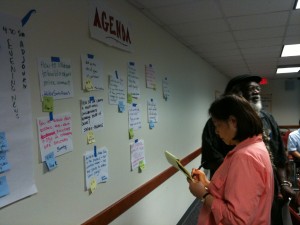