It reflects the themes that surfaced through the many conferences.  Since then, additional themes include:

What does it take to change a social system, an industry?  Like journalism…

For nine years, Journalism that Matters (JTM) has:

*            Invited people from all aspects of journalism: print, broadcast, and new media; editors, reporters, bloggers, audience, reformers, educators, and others;

*            Created space for conversations among peers about what matters most to them;

We have witnessed a new story of journalism being born as the old story is dying.  At its heart, that new story stays true – and enlarges on – a purpose many journalists hold dear: “to provide people with the information they need to be free and self-governing.” (Kovach and Rosenstiel, 2001)

For me, Journalism that Matters started with an act of violence.  In 1999 a mass shooting happened at a Jewish Community Center in Los Angeles.  I was working with Appreciative Inquiry, a process based in the idea that positive action follows positive images.  In other words, stories of danger make us hunker down, while stories that illuminate possibilities inspire and activate us. I thought, “the stories we are collectively telling ourselves, through journalists, are not serving us well.”

A friend introduced me to Stephen Silha, a free-lance journalist. Stephen connected us with Chris Peck, incoming president of the Associated Press Managing Editors. During our first conversation, Chris asked an ambitious question:

“What would it take to have a national conversation about the future of journalism?”

Stephen, Chris and I created a plan. We were subsequently joined by Bill Densmore, of the Media Giraffe Project.  While it has unfolded completely differently, Journalism that Matters has convened twelve conversations among more than 800 people from the evolving ecosystem of journalism.

Since we began, technology has radically altered the nature of our communications. The Internet enables anyone to publish, shaking old assumptions of who is a journalist and what constitutes journalism. Social networking technologies such as Facebook ushered in an age of many-to-many connecting.  We no longer depend on a few publishers and broadcasters to set the collective agenda. More than passive recipients of information, we are now active participants shaping our cultural narrative.

For generations, newspapers — and then television — gave us the news, telling us what needed our attention.  As we became “consumers” of news, the stories began to change, no longer providing what we needed to know as citizens.  Perhaps, this, as much as changing technology, has created a generation that finds no connection between journalism and democracy.  For many under 40, the information they need to be engaged citizens does not come through traditional journalism.  As aggregators like Google News use algorithms for choosing what stories matter, our cultural narrative arises from what we collectively follow.  So newspaper circulation and ad revenues decline, and broadcast news viewers age (think ads for Viagra and Boniva for bone loss).  Does this decline threaten the health of democracy?  Or has journalism as we know it passed its time?

Journalists struggle to understand their changing role in a context where anyone can publish, people engage each other about what matters to them, and technology aggregates the agenda.  The rest of us struggle with shifting from consumers to co-creative citizens.  Though it will be a while before we have a clear picture of journalism’s new story, its role in democracy, and our role in it, many exciting experiments give us clues to that future.  Through JTM we are learning about

*   the essential purpose of journalism,

*   the nature of storytelling,

The Essential Purpose of Journalism

The nascent beginnings of this expanded purpose are visible through “place bloggers”, online sites providing community news, information, and electronic conversation spaces in which residents exercise the muscles of civic engagement.  People share their stories. They see connections with local governance and with each other.  As the hosts of these local communities meet – as they did at JTM’s 2008 Minneapolis gathering (www.newpamphleteers.org), they make connections that re-knit the fabric of democracy from the grassroots out, feeding our larger sense of nation-as-community and even world-as-community.  No longer a one-way communication from journalist to audience, journalism sparks community conversation.  This changing role reveals some new characteristics of journalism: 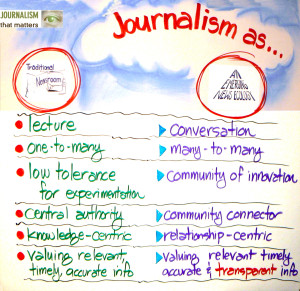 The Nature of Storytelling

If journalism has an expanded mission – to inform, connect, and inspire action — then the nature of journalistic storytelling itself is changing. Tom Atlee of the Co-Intelligence Institute offers a model that, among other things, can help assess the likely effectiveness of a story or a news organization by asking:

*   Does it inform? (a primary focus of traditional journalism)

*   Does it engage? (a primary focus of the social networking)

*   Does it inspire? (almost virgin territory, but hinted at by the idea of “possibility journalism” described below)

*   Does it activate? (almost untouched terrain)

*   Is it part of a process that facilitates collective learning-from-experience by the community?  (integrating all aspects as a cycle) 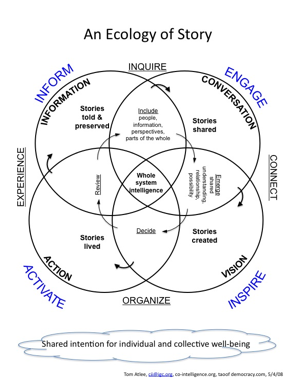 I was in the Middle East talking with a Palestinian about frustrating, polarizing material. He kept repeating the same ideas over and over so I asked that magic question: “given what’s happening, what’s possible now?” It shifted the interview completely, as our contact began envisioning the situation in a completely new way.

By adding “What’s possible now” to the traditional five “W’s” of journalism – who, what, when, where, why, and how — stories call forth hopes and aspirations.

At JTM-Washington, DC (www.mediagiraffe.org/wiki/index.php/Jtm-dc) there were fierce conversations between long-time journalists and newcomers.  One journalist had a change of heart about “citizen journalists” when their conversations made clear that the primary difference between pros and serious amateurs were (1) who gets paid; and (2) professionals COVER stories, citizens SHARE THEIR stories.

Journalists are no longer gatekeepers to the stories that matter, though many have been so busy guarding the gate that they have not noticed the fence is gone.  Still, with the vast increase of sources, the role of making sense of a complex and rapidly changing world is more vital than ever. And the range of options for receiving and making sense of news has exploded, becoming more confusing in the process.  Traditional sources — newspapers, television, and radio — are supplemented by blogs, video blogs, and Internet radio.  Sense-making often occurs through conversation, as social networking sites and local platforms for civil discourse support fact-checking and collective meaning-making.

For JTM-Silicon Valley (www.newstools2008.org), which brought together journalists and technologists, two maps were created: 1) the primary roles in a traditional newsroom and 2) a preliminary sketch of emerging roles. 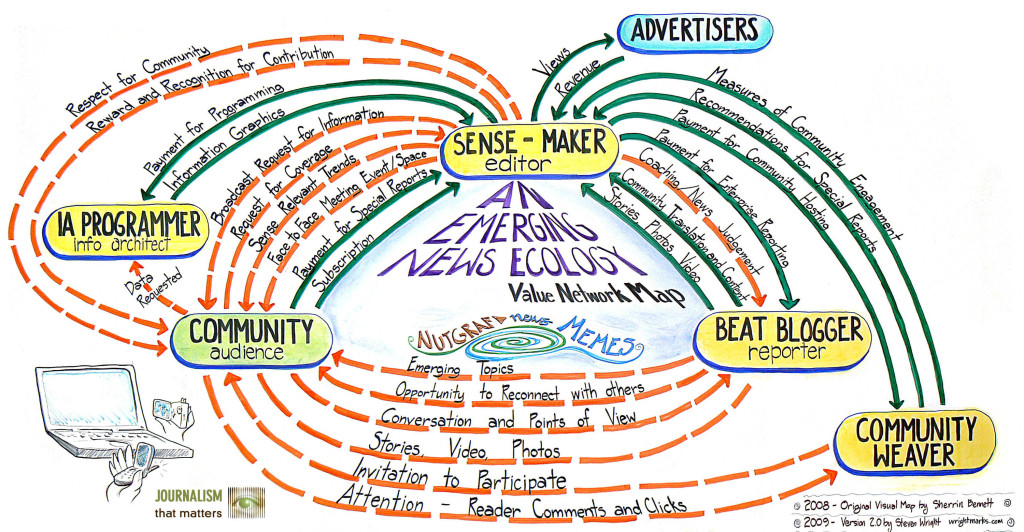 We began the emerging news ecology map with three roles: community, beat blogger, and sense-maker.  Given the growing emphasis on conversation,  “community weavers” skilled at hosting civil online (e.g., www.westseattleblog.com) and face-to-face conversations were soon added.  These roles are clearly just the beginning.

How Journalism is Practiced

No longer are events the only trigger for a story.  For example, JTM alum, Ilona Meagher (www.niu.edu/PubAffairs/RELEASES/2007/aug/ilona.shtml), unexpectedly found herself an expert on Post Traumatic Stress Disorder because she started writing about the interconnections she uncovered by researching a subject important to her.  Now she is in journalism school, learning the craft that adopted her.

More people are involved in telling stories today.  Tapping into networks of bloggers to bring complex stories into focus as “beat bloggers” (www.beatblogging.org) do, journalists move from outside the system to being key connectors within a system. 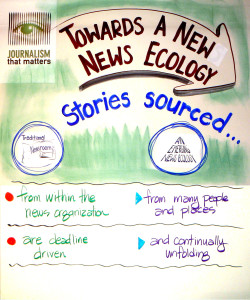 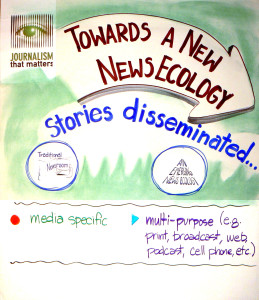 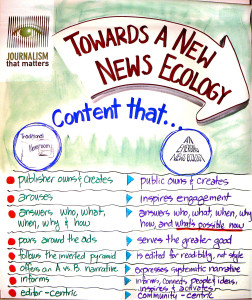 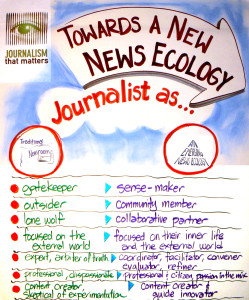 How Journalism is Taught

How do you prepare a new generation when the field is radically changing?  Some exciting insights emerged at JTM-DC, captured by Dale Peskin:

Of particular interest are the three roots:

*   journalism tools, including traditional craft and values, and emerging values and skills, such as transparency and multi-media reporting

*   the art of engagement – convening community both online and face to face. 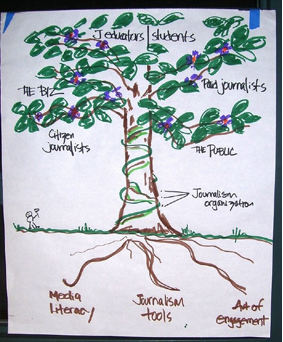 How Journalism is Financed

Likely last to emerge will be a viable economic model.  Among the ideas and experiments:

*   A utility model (funded as a basic service, like water and power)

*   Community-owned (every citizen has shares and citizens retain oversight authority)

*   Crowdfunding: JTM alum, Dave Cohn, funded by a Knight Challenge Grant created www.spot.us, “that allows an individual or group to take control of news in their community by sharing the cost… to commission freelance journalists.”

Changes to the economics include: 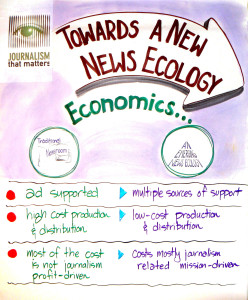 How do we engage an increasingly diverse audience? And how do we ensure investigative journalism – community, national, international – is done well?

I now believe that journalism is too important to be left solely in the hands of professionals.  Even as journalists struggle with their new role, it is up to us citizens to determine our place in the new media landscape.  Ultimately, the emerging news ecology will serve its purpose well only by answering the question:

How can journalism inform, engage, inspire, and activate us — materially, intellectually, emotionally, and spiritually — to be free and self-governing citizens and communities?

Thanks to Steven Wright for the visual recording.