The Media Seeds: Southeast Ohio Project is funded by the Jefferson Center as part of Your Voice Ohio, a nonpartisan effort to produce more relevant, powerful journalism based on the needs and ambitions of Ohioans and Ohio communities. Your Voice Ohio is supported with grants from the Democracy Fund and the John S. and James L. Knight Foundation.

In addition to working with residents in “media deserts,” JTM will collaborate with Your Voice Ohio to support deep engagement between Ohioans and local news. The media collaboration includes more than two dozen news partners throughout Ohio.

“We’re incredibly excited to be working with Journalism that Matters on this effort to better serve the information needs of more Ohioans,” says Kyle Bozentko, executive director of the Jefferson Center. “JTM’s unique approach will help us learn how communities, especially those lacking a significant traditional media presence, can best access the information they need to thrive.”

Ferrier, the project director, is the former president of JTM and the principal investigator for the Media Deserts Project, a research project that has been mapping media access at the local level in the United States at www.mediadeserts.com. As part of the project’s growing statewide data, Ferrier mapped opioid deaths to the media desert maps of Ohio. The Media Seeds Project will look at geographies hard hit by the opioid epidemic and media deserts. Ferrier is also the chief instigator of the Create or Die gatherings, an innovation collaboration workshop developed with Journalism That Matters. JTM has hosted Create or Die events in Greensboro, North Carolina and in Detroit.

Ferrier has been an advocate for media entrepreneurship and innovation at the local level. “I am committed to working with my neighbors and Ohioans across Southeast Ohio to connect, to imagine a new narrative for Appalachia and to seed communication experiments that serve our communities to thrive,” said Ferrier.

Journalism That Matters is a nonprofit organization that has been bringing together diverse community stakeholders to re-imagine the local news and information ecosystem and the role of journalism in a democracy. For more than 15 years, JTM has supported journalists, technologists, librarians, city planners, investors, media managers and others to shape new storytelling roles and story creating practices that support communities to thrive.

Following two breakthrough journalism and community engagement gatherings in Portland in 2017 and 2015, Journalism that Matters (JTM) released a framework for how journalism and other forms of civic communications interact to support thriving communities. The framework outlines new skills and knowledge to enhance a journalist’s effectiveness in community engagement as well as highlighting ways in which journalists can bring added value to communities as conveners of conversations.

Ferrier and JTM will be employing these practices in the SE Ohio work. Dr. Laura Black, associate professor in the Ohio University School of Communication Studies, will also be a partner on this project.

“JTM has been at the forefront of imagining new roles, new practices and new ways of fostering engagement. We will be employing those principles as part of our work. and re-imagining what it means to have a civic communications ecosystem that is inclusive,” said Ferrier.

Regional residents interested in the project can get more information at http://mediaseeds.wikispaces.com/ and see upcoming programs and regional events.

Journalism That Matters, a Seattle-based nonprofit, has been hosting breakthrough conversations with community and national stakeholders on the emerging news and information ecology. For more information on JTM, visit www.journalismthatmatters.org.

Jefferson Center is a nonprofit organization that partners with citizens, communities, and institutions to design and implement informed, innovative, and democratic solutions to today’s toughest challenges. For more information on our programs and mission, visit jefferson-center.org. 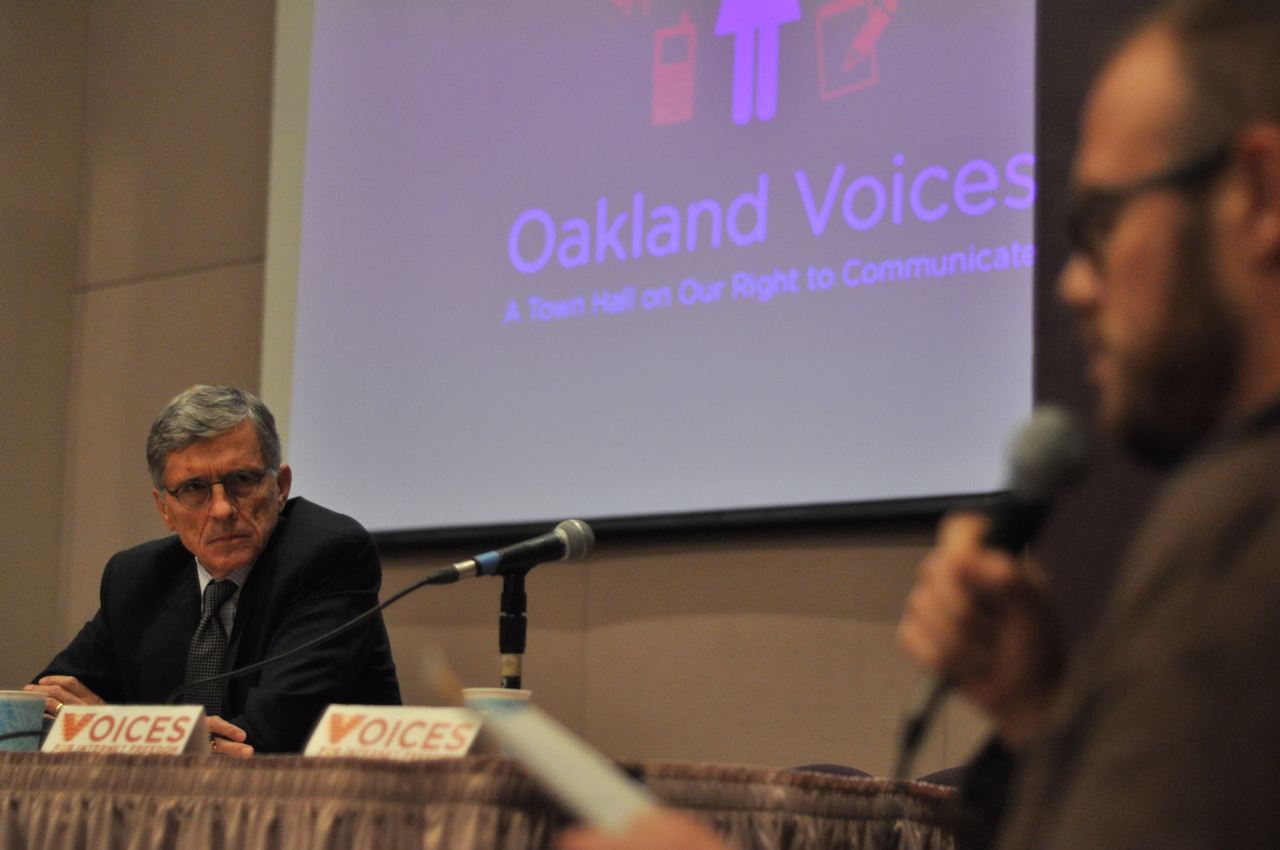 Although often ignored and rarely understood, the FCC will be playing a powerful role in determining the future of the Internet following a court decision to strike down net neutrality. While experts in law and media are still grappling with what will come of the decision, it’s become clear that FCC Chairman Tom Wheeler has now been granted tremendous power.

Wired compared Wheeler to Frodo, and I guess the ring is the way the media-industrial-complex seeks to rule over the Internet. But clearly Wheeler is not a common hobbit of pure heart, and it’s unclear how his past life in both the television and tech industries will influence his responsibilities as chairman.

So who is Tom Wheeler, and how will he lead the FCC in transforming the rules that govern how people and corporations can use the Internet? No one knows for sure what will define Wheeler’s FCC, but the man may have revealed some clues earlier this month when he attended a town hall forum in Oakland, California.

Wheeler’s tenure with the FCC began last November, and the commission has met only twice since he became Chair. His wikipedia page is almost bare, and the only substantial biography of him available on the Internet can be found on the FCC’s own Web site. Although Wheeler’s significance wouldn’t be fully realized until the Court of Appeals would publish its ruling the following week, just his decision to attend the attend the January 9 forum showed promise.

The town hall was organized by Voices for Internet Freedom, a collaborative effort between Free Press and the Center for Media Justice, and it was the first town hall that Wheeler has joined as FCC Chairman. Next week the Illuminations Blog will examine how these groups came together and were able to convince Wheeler to participate.

“I was a typical Washington player,” Wheeler told the packed auditorium. “My goal now with my new job and my new responsibility is to learn by listening, is to take in the kinds of data points and information and passion that I heard tonight and say ‘OK, what are you going to do about it?’”

Based out of Oakland, with staff in both Chicago and New York, the Center for Media Justice works to “create conditions that strengthen movements for racial justice, economic equity, and human rights.” It’s executive director Malkia Cyril has worked closely with Free Press in the past and the two groups joined together in 2010 to create Voices for Internet Freedom to focus specifically on issues surrounding equitable access to the Web.

In bringing Chairman Wheeler to Oakland, the coalition was able to raise awareness to issues that are often ignored by the media’s coverage of the FCC. Issues such as the high cost of prison phone calls and threats to the nation’s universal lifeline program, which provides phone access to low-income residents, disproportionately impact people of color — and those living in poverty  — and garner far less coverage than net neutrality and media consolidation.

Most of the two-hour town hall event consisted of local residents giving testimony to Wheeler about their own issues that could benefit from FCC intervention. Organizers said it’s been more than five years since an FCC board member had participated in a town hall, and both local leaders and lesser-known residents quickly lined up to seize the chance to voice their grievances.

The most common issues people raised related directly to the needs of Oakland’s working class community. Several people called on Wheeler to expand the lifeline program to include wireless broadband access. The lifeline program already includes some cell phone providers but does not include access to wireless data. More than one individual also called on Wheeler to drop the requirement that applicants provide the last four-digits of their social security number to access the service.

The high cost of prison phone calls was another issue raised by more than one participant. One woman spoke to the $3,000 she spent in phone calls to stay in touch with her incarcerated son, and Lisa Rudman, the executive director of the public radio program Making Contact, described how these high phone rates hurt people on both sides of the prison’s walls.

Other major issues were raised during the testimony, including health concerns surrounding wireless technology, rampant media consolidation, the lack of media owners and managers who are people of color, and the dire need to maintain net neutrality. It became clear that the digital divide and obtaining reliable Internet access is still a problem in cities like Oakland.

“At this point in history, more than any other point in history, the networks that connect us are the networks that define us, and its not just our economics, it’s not just our commerce, it’s our culture, it’s our individual lives and that makes the job of the FCC incredibly important and I take it incredibly seriously,” said Wheeler. “I’d love to sit here and say ok, it’s all solved but I can’t do that and you wouldn’t believe me if I did anyway.”

But some say that that the FCC chair did just that when he posted a blog responding to the Court of Appeals decision.

“Now that the Court of Appeals has ruled on the Open Internet (Net Neutrality) Order upholding the Commission’s authority to act under Section 706, I want to provide a further insight into my oft-repeated statement that I am pro-open Internet,” said Wheeler. “The key message is that the FCC has the authority — and has the responsibility — to regulate the activities of broadband networks.”

Although it does appear that Wheeler’s correct that the law still does allow the FCC the authority to regulate the Internet, he neglects to point out that the court explicitly rejected the way in which his predecessor Julius Genachowski sought to create such regulation. More importantly, it’s widely believed that the FCC rules governing net neutrality were actually designed to fail a legal challenge.

Still, the fact that Wheeler took part in the Oakland town hall is a clear indication that he is at least willing to listen to the needs of the community and his responses to their concerns suggest that his alliance may be to the American people and not the corporations he once served.

“The idea of lifeline for broadband is a legitimate concept and we’ve got to figure out how to make it work,” said Wheeler. He also vowed to continue the fight for regulations governing the cost of prison phone calls.

“There has been a set of values and the relationship between consumers and the networks that serve them and those values are not just going to go poof because someone has come up with a new technology for delivering those messages,” said Wheeler. “Those are the challenges that we’re going to be fighting.”

But it’s important to note that although Wheeler has clearly positioned himself as an advocate of Internet freedom and net neutrality, it is not just the free flow of ideas that he is professing should be protected but the market itself.