Thousands of newspapers across the country would instantly collapse if advertising completely disappeared, but for one small newsroom in San Francisco it’d just be one more story to tell in the next issue of the paper. 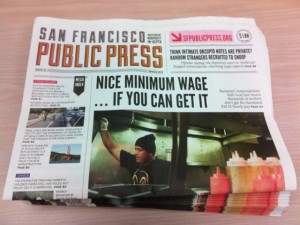 For the past three years, the San Francisco Public Press, a 501(c)3 nonprofit, has been distributing a newspaper throughout the Bay Area that is completely free of advertising. The paper sells for $1 at nearly 50 locations around San Francisco, Oakland and Berkeley, and the quarterly newspaper is also available through the mail for $4 an issue.

Michael Stoll, a seasoned reporter, editor and educator who wrote for the Philadelphia Inquirer and the San Francisco Examiner before becoming a journalism instructor at San Jose State University and the University of San Francisco, created the Public Press after attending his first JTM gathering inAmherst, Massachusetts.

“The open-space format of the meetings creates a natural serendipity where you can meet people who are doing similar projects and taking similar approaches across the country or abroad,” said Stoll on his experiences attending three JTM gatherings in which the participants define the agenda using an organizational technique called Open Space Technology. “The San Francisco Public Press benefited from this environment by starting out with the architecture of openness we saw permeating Journalism That Matters. More than anything, the meetings, and the email conversations that followed, encouraged us to just get started and try new things.”

After hosting several brainstorming sessions with Bay Area journalists in 2008, the Public Press received its first grant from the San Francisco Foundation in March of 2009 and launched a website later that year with publishing partners that included both the New York Times and McSweeney’s Panorama, a unique edition of the literary journal David Eggers publishes quarterly.

In December of 2009, the Public Press contributed the cover story for Panorama, the 33rd issue ofTimothy McSweeney’s Quarterly Concern, which for the first-and-only time was published in the form of a newspaper. Clocking in at a massive 320 pages, the one-off newspaper-format was Eggers’ attempt to ask the question whether there’s still life in printed news.

The nationally-renowned author received his answer when the paper immediately sold out across the Bay Area and a second printing was quickly ordered. Six months after helping Eggers publish Panorama, The San Francisco Public Press released the first issue of their own print publication in the Summer of 2010.

Unlike Panorama, which relied on advertising to fortify the money generated selling the paper, the Public Press has been staunchly advertising-free since inception. During the early meetings I attended while the newspaper was only a loose concept, Stoll seemed open to any ideas about where to take the paper unless they included advertising. Instead of ad-revenue, the Public Press relies on individual donors and foundation funding along with the money generated by selling the newspaper, which is made available for free at some senior centers and other community spaces in San Francisco that serve lower income residents.

“I think that the nonprofit model is under-utilized in new business,” said Stoll. “Especially since the commercial news model has so disastrously gone off the rails with the collapse of the advertising business.”

The Public Press just published it’s 11th issue last month. Each paper is divided into two sections. The front half of the paper includes in-depth coverage focusing on a particular public policy topic — the latest edition explores global warming and includes analysis of “California’s grand plan to curb climate change,” which was financed through the Fund for Investigative Journalism — and the back of the paper is comprised of follow-up coverage on topics previously tackled by the paper along with stories provided by its numerous nonprofit partners. 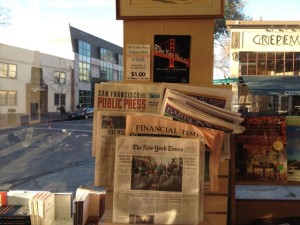 “There are many examples of corporations that have no compunction at all,” Stoll said when asked why the Public Press has chosen to only partner with nonprofit organizations. “Journalistically there are very many similar start-ups to ours that share our values and outlook, but we would rather support the community that grew up around the culture. … There’s a sense of camaraderie in the nonprofit sector.”

Lila Lahood works full-time as publisher alongside Stoll. The paper also employes a part-time news editor, a part-time membership manager and is hiring freelance writers on a regular basis. To support this growing infrastructure, the Public Press is now focused on developing its base of paid members. Right now it has over 200 supporters, but Stoll says he hopes to increase that number in the months ahead.

“The conversation in the nonprofit world — the buzz word — is membership and community support. And even though our program isn’t very big, we have some significant experience doing it and now we’re getting organized and realizing what an asset the community is,” said Stoll. “We’ve only had a concerted membership program for the last six months and that’s really been paying off.”