Collaboration in journalism is no longer a new concept, and it’s cropping up everywhere. There are many examples of reporters working with an audience to tell a story, and some examples where they merge their craft with other forms of storytelling altogether. In one case, an entire ad hoc army was built to tackle a large story when the Center for Public Integrity assembled 86 journalists in 46 countries to pore through the inner workings of offshore tax havens. Then there’s Climate Desk, a “journalistic collaboration dedicated to exploring the impact — human, environmental, economic, political of a changing climate.”

Climate Desk is a coalition of eight publications, The Atlantic, Center for Investigative Reporting, The Guardian, Grist, The Huffington Post, Mother Jones, Slate, and Wired; all putting aside competitive interests in order to address the increasingly drastic ecological changes throughout our planet.

Instead of the usual coverage of activists vs. denialists, they bring new angles to climate reporting; reporting which has typically lagged behind the paradigm shift as attitudes toward climate change shift. Stories include topics like changes in infrastructure, food supply, and animal behaviors (did someone say cannibal lobsters?). It’s an important resource in a time of uncertainty for environmental reporting, as shown when the New York Times dropped its environmental desk last year.

All of the partners contribute stories to the pool, and in turn, publish each others work to reach a combined readership of 200 million people, Senior Project Manager Jeremy Schulman told JTM.

So then, how do eight competing publications join together without stepping on each others’ toes?

Climate Desk operates out of the Mother Jones offices, which is where the idea formed in December 2009, right as the excitement was peaking before the United Nations Climate Change Conference in Copenhangen. Mother Jones is published by the non-profit

Foundation For National Progress, which brought in the additional philanthropic support for Climate Desk listed on their about page. The funding allows them to have four people on full-time staff who all take part in producing content, as well as aggregating all the climate related content for partners to share.

Climate Desk also produces their own original content for partners to publish while they’re out covering other stories. Along with originally researched articles, they also release the weekly “Inquiring Minds” podcast, hosted by Chris Mooney and Indre Viskontas, and the “Climate Desk Live” video events, which partners sometimes stream live on their own sites.

The breakthrough moment of Climate Desk was made possible because all of the original seven partners got into a room and had what Mother Jones co-editors Clara Jeffery and Monika Bauerlein described as the result of brainstorming “the perfect editorial meeting.”

Everyone found consensus on four points:

1) Climate change is slow-moving and vast, making it overwhelming for news organizations to grapple with.

2) What coverage there is tends to be fractured and compartmentalized—science, technology, politics, and business aspects are covered by different teams, despite the intrinsic connections.

3) Coverage is too often fixated on imperiled wildlife, political gamesmanship, or the “debate” over the existence of climate change, all at the expense of advancing the bigger story—how we’re going to address, mitigate, or adapt to it.

Once the common bond was established, the group could then move forward and start sharing the fruits of their combined labor.

While the entire group gets access to each other’s content, partners can request an embargo on a major story so they can break it first before others post it. This was the case when The Huffington Post revealed the NSA spying that took place during the Copenhagen summit.

“One of the unique things about collaboration is all the different partners offer unique beats and subject expertise” says Schulman. Case in point, Chris Mooney worked together with Dana Liebelson, who writes about national security for Mother Jones to report on the CIA funding geo-engineering research. This allowed someone from a science background to explain the technical side, in addition to someone with a political reporting background to explain the policy angle. “If we were operating on just a staff, it wouldn’t be possible” he noted.

Another good example is Phil Plait, a popular explainer of science who runs Slate’s “Bad Astronomy” blog. He put together a short video with the Climate Desk producers to set the record straight on the echoing misinformation around Arctic sea ice. Or take Suzanne Goldenberg, the environmental correspondent for The Guardian, who got the video crew to follow her to West Texas to document droughts caused by fracking, the aftermath of the West Virginia chemical spill, and a strange legal battle in Pennsylvania where Cabot Oil and Gas pushed a court injunction against an anti-fracking activist barring her from entering the supermarket.

One of the key factors that makes this collaboration work is the production assistance that Climate Desk offers when a story heats up. A partner can pitch a story to the team and get James West (Senior Producer) or Tim McDonnell (Associate Producer) to venture out in the field with them to produce a polished video. In a way it’s like having a jetpack to wear so a reporter can take their story to a level that wouldn’t be possible with limited staff resources.

For now, the multimedia production is handled by the small team at Climate Desk headquarters, with some help from other Mother Jones staff who have contributed their graphic talent. With The Huffington Post added as a new partner this year, thanks to their environment and energy editor Kate Sheppard, there is hope that the group will be able capitalize on their dedicated infographics shop and video studio where HuffPost Live is produced.

Don’t bog it down with process

When they first started out, Climate Desk had a structured protocol that involved daily conference calls, shared Google Documents, and a customized Publish2 feed. Now it operates under a more asynchronous workflow, without fancy tech or scheduled calls. 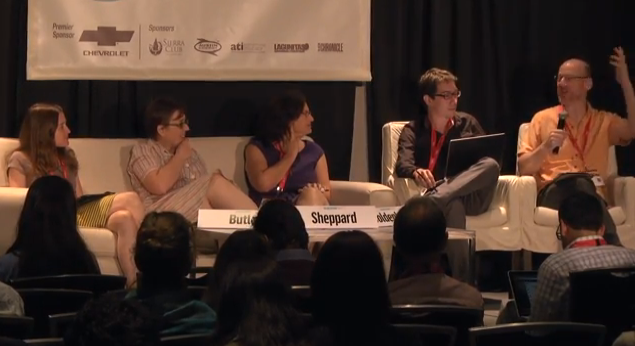 Instead, it’s centered around Schulman (Senior Project Manager), who wrangles together a daily email with all the upcoming climate stories for partners to nose through and print as they choose. When a partner wants multimedia support, they write to Schulman and he handles it on a case by case basis. “One of the advantages to Climate Desk building up its own dedicated staff over the last few years is that it makes communication and collaboration with the partners much simpler,” he says. “Rather than having to schedule an official ‘Climate Desk Conference Call’ with eight busy partners, the Climate Desk team communicates with individual partners throughout the day.”

Because partners aren’t communicating directly with each other, they don’t tend to team up on a given story. However, with Schulman as a dedicated liaison, they end up working together indirectly when it comes to planning coverage of big events.

“In the run up to the release of last year’s IPCC report, for instance, several of the partners shared story budgets in advance. We were able to alert partners in advance that both the Guardian and Climate Desk’s Tim McDonnell would be reporting live from Stockholm and that Climate Desk’s Chris Mooney would be breaking down the science.” Climate Desk also ran a live blog highlighting coverage from across the partnership, and because they knew about it advance, it was republished by Atlantic Cities to gain further reach.

Where will the experiment lead?

It’s safe to assume a noticeable increase in content and distribution that is made possible by the collaboration. Climate Desk partners disseminated 430 different stories last year, 150 of those were written or produced by Climate Desk staff themselves. Along with the 200 million combined monthly readers around the world, there’s the added bonus of cross sharing on social media, with an extra boost of ~50,000 followers that are growing on @ClimateDesk’s Facebook and Twitter. Another side advantage to the collaboration is that it’s easier for partners coordinate face-to-face events together, like this SXSW eco panel discussing problems with mainstream climate coverage.

While there have been setbacks in the field, like the New York Times dismantling its environmental desk, there are figures that show demonstrated growth of climate based reporting. Besides Climate Desk, there are dedicated outlets out there like The Daily Climate, Inside Climate News, and Climate Central.

While there are clear benefits to collaborations like Climate Desk, it’s important to note that its success has relied on donations from private philanthropists. There are questions as to whether alternative financial models can develop to produce strong teams that report on a single issue. One brave new attempt is “Climate Confidential” which just reached their crowdfunding goal on Beacon, and plan to be entirely reader supported.

What other collaboration possibilities do you see out there? Can a coalition form around other major issues like health care or education?