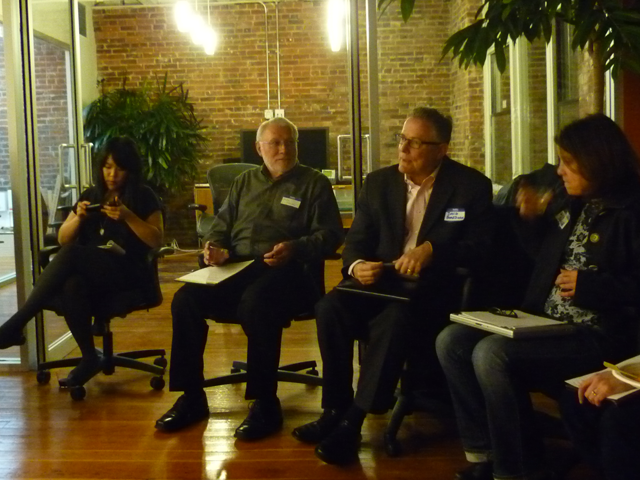 I once heard retired Seattle Times Executive Editor Mike Fancher describe himself as a “one-man crusade” to save Journalism. That was several months ago, and he’s not alone anymore.

Last year Journalism that Matters held it’s monumental Pacific Northwest Unconference where several projects have since emerged. It was then that Fancher formally launched his mission to “cultivate abundant journalism” and last night marked a significant milestone in that effort.

Twenty-one of the region’s most influential news experts and enthusiasts gathered at the swanky offices of Seattle Magazine to discuss the state of news and information in our region, with the overall goal of finding ways to increase the level of quality journalism across the Pacific Northwest. As a bonus, Banyan Project founder and Harvard Berkman fellow Tom Stites came along for the ride. The “Dream Team” roster included:

The evening was off to a good start with a few well received announcements. The first came from Investigate West founder Rita Hibbard who was just awarded their second grant from the The Ethics & Excellence in Journalism Foundation. Another item of interest was Seattle Times writer and Global Health Initiative co-founder Sanjay Bhatt’s mention of a new collaborative report on Global Health Journalism. The crowd also warmly welcomed journalist Anna Bloom‘s arrival to our fair city to weave together a new open government system as part of her 2011 Code for America fellowship.

Now that the pump was primed, JTM founder and conversation steward Peggy Holman broke the room up into pairs, followed by small groups, and ending with a full circle report.

Several themes emerged, as we aimed to discuss not just what needed to be done but what was already working. Many were in agreement that Seattle’s strong network of hyperlocal neighborhood sites serve a very unique and valuable role, and Seattle Times Executive Editor David Boardman shared his belief that his publication’s recent “networked journalism” partnership with several hyperlocal sites not only made sense on a civic level, but from a business perspective as well. Everyone nodded their heads at the idea of collaboration, and it was refreshing to hear KING-5 Digital Media Director Mark Briggs talk about how his station and several competitors all got together with the WSDOT before the November snow storm and strategized the best way to get out breaking information over their respective networks and on social media. KING-5 and The Times are also kicking off a “be local” partnership to use their ad reps to help bring in revenue to hyperlocal blogs.  Luke Timmerman of Xconomy reminded us that it doesn’t have to be a zero sum game, and his syndication partnership with the Seattle Times has driven traffic to both sites.

Of course, talk is one thing, but doing is always the challenge. How can we get more work done and bring more voices into the mix? A good part of the discussion talked about some of the events sponsored by journalism organizations and their potential for generating revenue as well as strengthening the role of journalists themselves. The Puget Sound Business Journal and the Northwest Asian Weekly were recognized for putting on successful events that engage their niche audiences face to face and bring in a little extra dough on the side. The role of journalists can also shine through, as we pondered the difference between a hypothetical event about police conduct hosted by the mayor versus the hot sparks that flew from the recent forum on police accountability put on by The Stranger. Luke Timmerman of Xconomy also had good things to report about their events, and was quick to stress the importance of being upfront with your sponsors about the separation between business relationships and editorial decisions in the newsroom. Finding a comfort zone for all parties is important, as questionable events from the Washington Post, The Wall Street Journal, and The Economist have all received various levels of scrutiny.

Now comes the important part, the follow-through. Business cards were exchanged and the group agreed on quarterly face to face meetings, but how to we grow from there? JTM has always been successful at bringing people in the flesh, and now the time is ripe to flesh out that energy online in a way that increases involvement and productivity. I encourage journalists, students, and knowledgeable citizens of all stripes to join us in this space, start a session, or dive into an existing one like Mike Fancher’s Journalism Commons PNW. Tell us what you need to make this happen.

Some good stuff to expect are a shared calendar that streamlines journalism events across the board, as well as a “behind the curtain” collaboration that shows how journalism gets done and reveals the networks that make good stories happen.

Brian Glanz put together some awesome tools, and the fire’s just warming up.

This post is a part of the Carnival of Journalism project initiated by David Cohn at the Reynolds Journalism Institute at the University of Missouri. This month David assigned the Carnival to answer the question: “Considering your unique circumstances what steps can be taken to increase the number of news sources?”

4 thoughts on “Seattle’s BOLD plan for a Journalism Commons”