David Weinberger at “Beyond Books” — what’s the opposite of long-form thought? 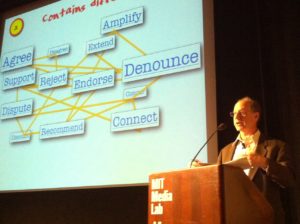 What’s the opposite of long-form thought? Is it web-thought. David Weinberger helps catalyze the conversations at “Beyond Books” as he talks about how knowledge is becoming transitional, not fixed in form.

“A web of knowledge based on human interests is a more logical expression of the world than long-form argument,” he says.  The result — the crumbling of institutions such as encyclopedias and newspapers.  “one part of the answer — we re tired of being talked to,” says Weinberger. Also, he says, the world is too big, there is too much to know, and knowledge can no longer be hemmed in.  It is now “always an argument,” rich, curious, open-ended. “We knew that all along and the moment we were able to have a medium that expressed that basic fact, we ran to it.”

This entry was posted in Conference Information. Bookmark the permalink.