For several years, Laurie Norton Moffatt has been thinking and writing about the role of public institutions in creating and fostering community. Moffatt is director of the Norman Rockwell Museum in Stockbridge, Mass., the living repository of works by the iconic American illustrator. 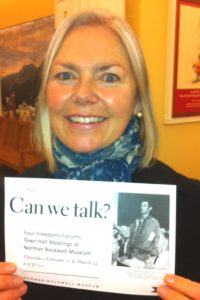 His World War II-era drawing of a series of covers for the Saturday Evening Post, “The Four Freedoms,” inspired Norton Moffatt last fall to begin a series of three community town meetings at the museum, to foster “Can We Talk” conversations about important civic topics.

She didn’t decide the topics herself, she convened a group of citizens to do so – and they chose three themes: (1) Sickness, Wellness and Social Responsibility, (2) Freedom from Want: Food, Farmers and Families and (3) Four Freedoms for All? A Community Dialogue about Immigration.

The events proceeded — as would a New England Town Meeting — respectfully moderated, with any attendee free to step to the microphone and say their piece on the topic.

Norton Moffatt will join us at Beyond Books and at an appropriate point she’ll discuss how the “Four Freedoms Forums” worked and how the concept might be adapted by other museums and libraries.

Moffatt did a masterful job of crafting ground rules for discussion. Here’s a slightly abridged version of Norton Moffat’s introduction to the food, farmers and families evening:

The idea for the Four Freedoms Forum was born amidst the strident rhetoric of last year’s political campaign and is rooted in the democratic principles so eloquently expressed in Norman Rockwell’s Four Freedoms. As thoughtful positions about topics important to our nation such as health care, immigration, poverty, energy, the economy, jobs and education became reduced to sound bites and party labels, phrases like The Tea Party and Obama Care, Conservative and Liberal, became code phrases to stand in and substitute for thoughtful discourse about the most pressing topics of our day. Civility became a quaint archaic concept and it became increasingly difficult to learn what the real facts are behind issues of importance to us all.

Norman Rockwell Museum Four Freedoms Forums are open to everyone. A non-voting meeting, these conversations do not aim to result in decisions or outcomes, winners or losers. Instead, the goal of the gathering is to engage in polite, respectful dialogue to learn and express a variety of viewpoints about a topic. We hope these meetings will inform us and inspire ongoing civic action on these topics out in the larger community.

We hope, too, that the Forum will serve as a model for civil discourse, inspired by the painting hanging behind me, Norman Rockwell’s Freedom of Speech, which depicts a gentleman standing to speak at a Town Meeting, surrounded by respectful listeners, who may or may not agree with the speaker, but who are turned to face and listen respectfully to what he has to say.

Dialogue and open inquiry emphasize listening, honesty and open-mindedness. In order to keep our conversation from moving toward an adversarial debate or non-personal discussion, we request that the following guidelines for civil dialogue be observed.

Our Guidelines for Conversation

I will serve as moderator of the meeting. In my role, I and the Museum will remain neutral about a topic, but we encourage you to express facts related to the issue and to offer your personal opinion. In fact, we will consider the Forum a success if there are a wide range of opinions expressed that are conveyed with passion, but without rancor, to which we all listen, and perhaps open our minds and hearts to a broader perspective.

We believe our community is hungry for intellectual stimulation and conversation. To select the topics for the meetings, we formed a Citizens’ Council, comprised of a diverse group of community leaders and citizens to select the topics and help generate an audience. I want to thank these citizens for their volunteer time.

The experts on the Forum topics are also volunteers from our community, people who have graciously agreed to assist in framing the issues with facts and their expert opinions.

Tonight’s topic selected by the Citizens Council is focused on food, farm and families.

“I am more and more convinced that, with reference to any public question, it is more important to know what the country thinks of it than what the city thinks. The city does not think much. On any moral question, I would rather have the opinion of Boxboro than of Boston and New York put together. When the former speaks, I feel as if somebody had spoken, as if humanity was yet, and a reasonable being had asserted its rights — as if some unprejudiced men among the country’s hills had at length turned their attention to the subject, and by a few sensible words redeemed the reputation of the race. When, in some obscure country town, the farmers come together to a special town-meeting, to express their opinion on some subject which is vexing the land, that, I think, is the true Congress, and the most respectable one that is ever assembled in the United States.”

Tonight we will hear from some farmers, a chef, a farmer’s cooperative and a food pantry.

Sustainable agriculture. Food Security. Locally-Sourced food. Hunger and poverty. Nutrition. Health and wellness – Obesity, Diabetes and the run-away cost of health care. The sources of our food, land use and agriculture policy and food affordability. Daily we see headlines in the national and local news on these topics. 12% of the citizens in Berkshire County fall below the Federal poverty level. How does healthy-eating fit into this picture?

Last year I viewed the documentary King Corn and learned that for many Americans, their bodies are made of 80% corn! How can that be, two students from Yale wondered, and they set out on an odyssey to see where corn is grown and to try their hand at growing corn in the Farm belt. A year later, they had learned about Federal agriculture policy, the thin margins of survival of farmers, genetically engineered corn, the relationship of the petrochemical industry to farming; corn raised for ethanol, corn-fed beef, high fructose corn syrup, the corn-based nutrition of fast food, the explosion of diabetes and obesity in our nation’s children due to poor nutrition and much more.

In 1940, food purchases accounted for approximately 40% of a family budget. Today, thanks for federal agriculture policy, it is about 10%, making food affordable for more people. This is a good thing, right? Or is it, when we learn that the population living in poverty has the worst health statistics and poorest nutrition, thanks to inexpensive, but nutrition-empty food.

Fast Food Nation; The Omnivore’s Dilemna; In Defense of Food, authors like Michael Pollen and Barbara Kingsolver, among many others have been writing about food, farming and sustainability, raising public awareness of this essential need for human life.

I’m indebted to Michael Pollan, a prolific author about the food movement, who wrote last year for the New York Review of Books about the emerging and merging food movement. Here is an excerpt of his cogent summary.

“Cheap food has become an indispensable pillar of the modern economy. But it is no longer an invisible or uncontested one. One of the most interesting social movements to emerge in the last few years is the “food movement,” or perhaps I should say “movements,” since it is unified as yet by little more than the recognition that industrial food production is in need of reform because its social/environmental/public health/animal welfare/gastronomic costs are too high.

“As that list suggests, the critics are coming at the issue from a great many different directions.

Where many social movements tend to splinter as time goes on, breaking into various factions representing divergent concerns or tactics, the food movement starts out splintered. Among the many threads of advocacy that can be lumped together under that rubric we can include school lunch reform; the campaign for animal rights and welfare; the campaign against genetically modified crops; the rise of organic and locally produced food; efforts to combat obesity and type 2 diabetes; “food sovereignty” (the principle that nations should be allowed to decide their agricultural policies rather than submit to free trade regimes); farm bill reform; food safety regulation; farmland preservation; student organizing around food issues on campus; efforts to promote urban agriculture and ensure that communities have access to healthy food; initiatives to create gardens and cooking classes in schools; farm worker rights; nutrition labeling; feedlot pollution; and the various efforts to regulate food ingredients and marketing, especially to kids.

“It’s a big, lumpy tent, and sometimes the various factions beneath it work at cross-purposes. For example, activists working to strengthen federal food safety regulations have recently run afoul of local food advocates, who fear that the burden of new regulation will cripple the current revival of small-farm agriculture.

Joel Salatin, the Virginia meat producer and writer who has become a hero to the food movement, fulminates against food safety regulation on libertarian grounds in his Everything I Want to Do Is Illegal: War Stories From the Local Food Front. Hunger activists like Joel Berg, in All You Can Eat: How Hungry Is America?, criticize supporters of “sustainable” agriculture—i.e., producing food in ways that do not harm the environment—for advocating reforms that threaten to raise the cost of food to the poor. Animal rights advocates occasionally pick fights with sustainable meat producers (such as Joel Salatin), as Jonathan Safran Foer does in his recent vegetarian polemic, Eating Animals.

“But there are indications that these various voices may be coming together in something that looks more and more like a coherent movement. Many in the animal welfare movement, from PETA to Peter Singer, have come to see that a smaller-scale, more humane animal agriculture is a goal worth fighting for, and surely more attainable than the abolition of meat eating.

Stung by charges of elitism, activists for sustainable farming are starting to take seriously the problem of hunger and poverty. They’re promoting schemes and policies to make fresh local food more accessible to the poor, through programs that give vouchers redeemable at farmers’ markets to participants in the Special Supplemental Nutrition Program for Women, Infants, and Children (WIC) and food stamp recipients.

Yet a few underlying tensions remain: the “hunger lobby” has traditionally supported farm subsidies in exchange for the farm lobby’s support of nutrition programs, a marriage of convenience dating to the 1960s that vastly complicates reform of the farm bill—a top priority for the food movement.”

Here in the Berkshires, we have lost 20% of our farmland to real estate development during the past decade. Yet our locally grown farm movement is robust, has organized, educated and worked to create a network of farm to table systems that have encouraged local farmers markets, restaurateurs and supermarkets to support local farmers. Plus they grow delicious, nutritious food available in abundance without needing to be flown or shipped across country or around the world.

So how does society shape public policy when balancing competing values? Can the Berkshires shape policy that knits food affordability and sustainability on a local level?

Our experts tonight will touch on these topics and more. After their introductions, we will turn the conversation over to you for your comments and questions.