2010: Journalism That Matters For the 21st Century 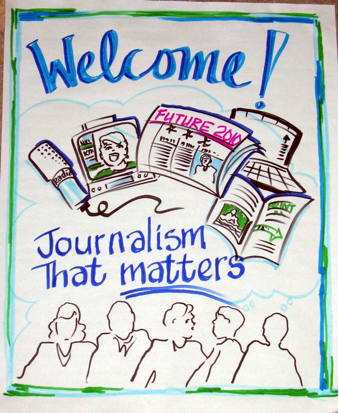 On October 6-9, 2005, twenty-nine people in journalism (print, broadcast, new media, citizen activists, educators, a student, a funder and a Wall Street analyst) convened at the Fetzer Institute’s Seasons Retreat Center to consider the future of journalism.

The gathering was filled with rich, multi-textured, and creative conversations.  Personal shifts from despair to hope occurred for many participants.  Most left the gathering with tangible actions to pursue as several promising projects emerged.  Perhaps most exciting, an innovative idea for creating a new style of newsroom, populated by a mix of professional and grassroots journalists, was born.  Given the clear commitment among key participants to pursue this idea, this was a particularly specific and potentially useful outcome.

Successful with journalists, the process itself (self-organizing, primarily using Open Space Technology) is a model for people in other sectors who wish to convene gatherings that produce a clear path for action.  Its effectiveness originates from its integral nature, simultaneously engaging…

…the inner, authentic presence of participants and

…the inner stories that form the “master narrative” of a culture, and

While detailed reports written by the participants provide texture and depth, some themes that surfaced include:

Fetzer’s mission of love and forgiveness was a nuanced and profound force, continually surfacing throughout the meeting as the question “What’s love got to do with journalism?”  It showed up in sessions on healthy journalists, creating new economic models that serve communities, and preparing the next generation to be storytellers in and of their communities, with journalists as teachers, editors, and “weavers.”  In fact, on the final day, one participant convened a session specifically on love and forgiveness and journalism.

Several potential next steps emerged from the meeting:

This meeting took the seeds sown in the April journalism probe and expanded on its three themes, framed by recognition of the Power of Storytelling:

Cultivating “healthy journalists”, renewing the inner life of the journalist;

Preparing the next generation, with an eye towards the emerging citizen journalist; and

Inventing a new economic model. As one participant put it, “Rather than further compromise the work, it’s time to separate journalism from its current funding sources and find a new model.”

What We Learned about Journalism

The October gathering made clear that the essential core of journalism – the spirit of making a difference – is alive and well.  It simply needs to be welcomed and supported.  The journalists themselves did this through the agenda they created.  As one participant remarked, “No one could have planned as good a conference agenda as we produced.”  The themes from the original probe were woven throughout the breakout sessions.

The Power of Story

“Journalism as a conversation.”  This has significant implications for how stories are told and the nature of the stories.  It implies more interchange with citizens, including a welcoming hand for citizen journalists, and a journalism responsive to public voice.

How does good storytelling adapt to the new technologies, such as Instant Messaging, Podcasting and cell phones?  One session collected over 30 examples of new ways to tell stories.

A pattern for community journalism emerged: conversation leads to engagement which revitalizes democracy.

One specific project, Healthy Oakland, reflects the power of using a variety of community storytelling approaches.

As a participant quoted: “Work is love made visible.” — Kahlil Gibran

“Healthy journalists” pervaded virtually every discussion.  Rather than explicit conversation about the inner life, this theme was expressed principally through the many passionate explorations of journalism that serves the greater good and in doing so brings meaning and health to journalists.

The inner life of the journalist affects the types of stories they tell, as well as how they tell them.

One participant made a personal commitment to blog about loving what he does and atoning for sins committed in the name of journalism.

Many reconnected with what inspired their choice of profession: wanting to make a difference in their communities.

Preparing the Next Generation

The changes in the field are epochal – new structures, attitudes, and skills make the old ways obsolete.  Ironically, this creates a wonderful opportunity for two-way mentoring.  Older journalists bring experience and the young bring storytelling for the emerging social and technological landscape.

An exciting model for the newsroom emerged using a mix of professionals, grassroots journalists, and collaborations between them.

A new kind of community media training program is being developed by Reclaim The Media, Seattle.

What does today’s journalism student need to learn?  New and classic skills were identified.

Economics is the connective tissue between the inner needs of journalists and the outer context in which they operate.  A remarkable rolling conversation engaged every participant sometime during the gathering.  Both evenings were filled with intense explorations of the interconnections among print, broadcast and new media.  An innovative idea for a newsroom based in the premise of journalism as a conversation emerged.  Imagine a “newsroom café” where journalists tune into their community and stories are covered by a mix of professionals and citizen journalists.

RFA:  Ready – Fire – Aim emerged as the approach to introducing new ideas in a wired world, engaging audience in uncovering and evolving what works in real time.

What We Learned about the Process

The process used for this gathering brought a powerful sense of renewal to participants identifying both individual and collective possibilities for action.  Many participants noted how effectively it engaged them on multiple levels – individual and collective, their inner life and their outer world.  Evidence suggests it would have a similar impact on people in other fields in transition.

The essential principle of the process is an invitation for participants to take responsibility for what they love.  In doing so, they consistently reconnect with their own internal passions and they discover that collectively, no matter how different they seem to each other, they care about the same core ideals.  This discovery reconnects people to the larger whole, while celebrating the uniqueness of each individual.

The process began with personal invitations from the April probe participants.  The willingness of busy people to take the time and reach out to their networks is a testament to the commitment generated by this approach.  Because the invitations came from trusted associates, we were able to bring together some very unlikely players, as exemplified in this pre-conference e-mail:

Hi.
Candidly, my generational and other attitudes probably are bubbling to the fore, but this all seems pretty touchy-feely to an impatient, 60-something, kind of grumpy person recently described  as a “no-nonsense taskmaster.”  Tell me we’re not going do something akin to sitting around darkened  rooms with candles, incense and bamboo flute music getting in touch with  our inner selves in order to solve life’s (and journalism’s) problems. Otherwise, you may have the wrong guy.
Apologies and warm regards and best wishes to all.

By the meeting’s end, a participant hosted a breakout session reflecting a profound shift in attitude:

Establish Journalism Day of Atonement to:
1) Express love for what we do
2) Ask Forgiveness for sins committed in the name of journalism
3) Pledge to do better

Once identified, participants were paired to do an appreciative interview with each other by telephone before the gathering, serving multiple purposes:

–         to understand the rich diversity of perspectives and experiences they brought to the subject;

– to develop relationships among them;

– to build on the themes from the original probe; and

– to energize the meeting by jump-starting the reflections and conversations.

Participants shared summaries of their interviews with each other.  Bios were also provided, helping people understand the depth and breadth of their collective experience.

The core process during the face-to-face time was Open Space Technology (OST).  The basic pattern of OST is an invitation for people to host breakout sessions on topics of personal interest.  When held over three days, OST follows a predictable self-organized trajectory: a day of angst for the current situation (day 1), an exploration of what’s desired (day 2), and tangible ideas to create a better future (day 3).  All without a facilitator telling anyone what to do.

A report of the sessions was produced and distributed each morning.  The session notes were written by participants.  Graphic recording was also used to enhance the readability, creativity, and shareability of the reports.

A follow-up conference call, open to all who attended the meeting, occurred on October 27.  With 10 meeting participants on the call and another seven sending regrets, it is clear that the energy from the gathering is quite strong three weeks later.  In fact, the bulk of the call was a discussion of the projects that either emerged from or were influenced by the meeting at Seasons.  One participant, a funder who was not at the conference, was so impressed with the call that he committed $10,000 to support the ongoing work of the group.

Multiple projects were identified by participants.  Many fit well with Fetzer’s program areas.  Those that might benefit from additional involvement from Fetzer are noted.

Draft a grant proposal for a new model of community journalism
Spanning all of Fetzer’s program areas, this ambitious and inspiring proposal is a remarkably simple, powerful idea.  Test a newsroom model that uses professional and citizen journalists working independently and together, garnering stories from a “marketplace of ideas” that can be fed by anyone.  Look for communities which currently have no coverage and wish to invite in a news organization.  A first next step is to convene a conference call between possible funders and key conference participants.

(possible next step for Fetzer)

Recovering the Heart of Vocation

Support a journalism community of practice

Support the heart of vocation by continuing to connect participants electronically and further seeding these ideas by bringing together more journalists.

Already committed to action, one participant hosted a session to define a project in which the voices of the community are as prominent as the professional journalists’ stories. It is a place for conversation, for stories, for information.

(funded by the Oakland Tribune)

Telling the Story of Love and Forgiveness

Journalism Day of Atonement
This session explored a possible connection between journalism and the films Fetzer is currently producing on love and forgiveness.