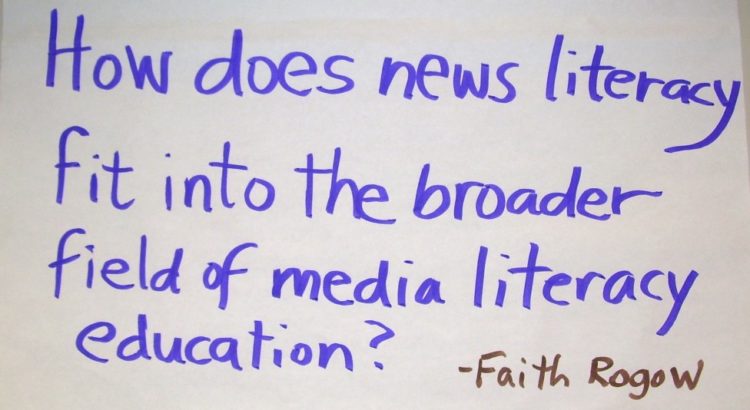 How do you know if you’re getting the truth from the news media? Stony Brook University’s innovative course in News Literacy–open to all undergraduates–trains the next generation of news consumers to think critically about what they read, watch, and hear. *Howard Schneideris founding dean of the School of Journalism at Stony Brook University, Long Island, and former editor of Newsday, the Long Island daily.

A new initiative by American’s newspaper editors to understand and promote “news literacy” has kicked off with an Aug. 11-12, 2008seminar at The Poynter Institute attended by about 40 journalists, educators and students. Key goals, according to Poynter co-convenor Kelly McBride: (1) Become more articulate about news literacy as a topic (2) Come up with a series of projects to implement at the local level. VIEW SEVEN IDEAS RESULTING FROM ASNE-POYNTER SESSION.

For eight years, the American Society of Newspaper Editors (ASNE)and the Reynolds Journalism Instituteat the Missouri School of Journalism have supported a high-school journalism innitative.Highlights include creating the world’s largest Web host of teen-generated news, a training program for journalism advisers and a national advertising network. Now ASNE is creating a “news-literacy toolkit” for U.S. daily editors which it plans to unveil at its April 26-29, 2009 convention in Chicago. Key supporters of the initiative are Charlotte H. Hall, ASNE president and editor of “The Orlando Sentinel,” and Rex Smith, ASNE education committee chair and executive editor of the “Albany” (N.Y.) “Times Union.”

“Rebooting the News” participant Lena Consolini, of Hadley, Mass., has updated an undergraduate thesis on the effective of the 1988 Hazelwood v. Kuhlmeier. decision on student publications. She recommends states adopt student press protections, and local school districts and journalism advisors should develop written policies for students journalists and school officials to follow. She found the decision left so wide an interpretation of its terms, it has allowed
for more administrative control over student newspapers by permitting
prior restraint of controversial topics. The case also severely limits the
First Amendment protections for student publications. This leaves students
striving to find a balance between upholding professional values without
the same freedoms of the professional press. READ HER FULL REPORT

In early September, LinkTV announced the start of “Know the News,” a video resource which provides games and tools for students to test knowledge of how how news is shaped and remix their own version of the news. Trials are underway in Austin, Texas, Washington, D.C. and Salzburg, Austria, and LinkTV is looking to sign up additional teachers who will begin trials. LEARN MORE ABOUT KNOW THE NEWS.

A former “Los Angeles Times” reporter has launched what he calls “an innovative program to help secondary-school students sort fact from fiction in the digital age.” Alan C. Miller plans pilot projects in 2009. The “News Literacy Project” is backed by funding from the Ford Foundation and the John S. and James L. Knight Foundation. The idea for the project arose from Alan Miller.s experience talking about his work and why journalism matters to 175 sixth graders at his daughter’s middle school in Bethesda, Md. The first pilots will be in schools in New York City and Montgomery County, Md. Additional sites will be added in the next year. A detailed news release about the project is available from its website.(Announced Sept. 17, 2008)